A courageous group of fundraisers has so far raised £14,000 for Rowcroft Hospice by taking on its brand new event, Over the Edge – ‘The Drop’.

The event, which took place on Saturday, 8th April, saw 100 men and women from across South Devon complete a 100ft abseil off the side of a crane poised in Rowcroft’s grounds.

Amy Burton-Smith, 34, from Teignmouth said: “My family lost my Uncle last year and he was cared for here at Rowcroft. We experienced first-hand just what extras the hospice offers; they cared for my Uncle, his wife and all the other members of the family, so we felt we had to do something to support the hospice.

“I am doing a lot of fundraising for Rowcroft this year, starting with this abseil because I am terrified of heights. I got up there and thought, there are people at Rowcroft who are having a much harder battle than me – so I have to go ‘Over the Edge’.”

Included in the group of thrill-seekers to complete the challenge was Rowcroft’s new Chief Executive, Mark Hawkins, who said: “I wanted to do it because I think it’s important to throw yourself into all these activities – it was slightly terrifying but fantastic fun!

“I am hugely appreciative to all those who’ve taken part and helped raise money for Rowcroft.”

Also able to experience the 100ft climb was Rowcroft Inpatient Unit patient, Robin Westlake, who after a last-minute request was lifted up in the crane with member of Rowcroft’s nursing team, Mary Glancy. 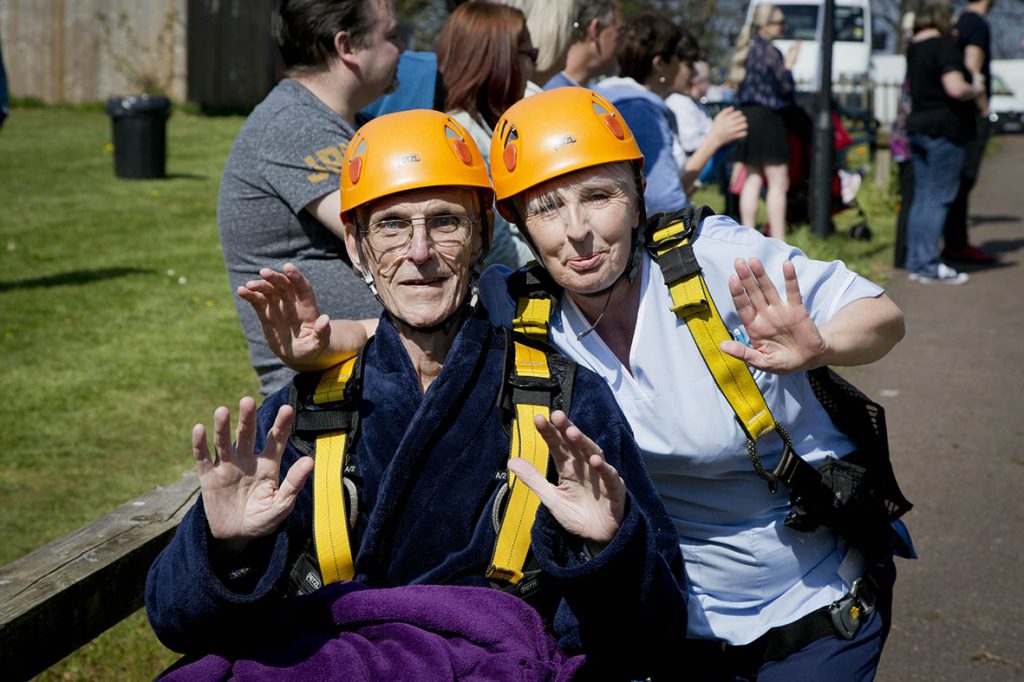 Robin said: “It’s just like going up in a lift really! I’d like to say thank you to Rowcroft for arranging this, it was really tremendous and such good fun.”

Rowcroft’s Events Manager, Daniel Robson, is delighted the hospice’s first ever challenge of this kind has been such a huge success.

He said: “On behalf of everyone at Rowcroft I would like to say a huge thank you to all those who took on this terrifying challenge and raised such a fantastic amount for local people living with life-limiting illnesses.

“Our thanks also extend to the many generous people who kindly volunteered their time to ensure today ran smoothly and safely.”

Over the Edge – ‘The Drop’ is one of many events being organised by Rowcroft this year to raise funds following the hospice’s drastic funding shortfall in 2016.

“We are incredibly grateful to all those who have gone to great efforts to raise funds for us as a result, but the next few months are also crucial to securing the long-term future of the hospice.”

Other events the hospice is organising for 2017 include The Colour Rush Teignmouth, a paint-fuelled 5k taking place on Sunday 11 June, The Sleep Walk, South Devon’s biggest ladies-only night walk on Saturday 8 July, a new event in Paignton in September – more details of which will be announced soon – and the hospice’s popular cycle challenge, Ride for Rowcroft, will be back in October.

Daniel added: “We are delighted to be able to offer the local community so many exciting ways to support their local hospice in 2017 – luckily not all of them needing a head for heights like todays!”

To find out more about the ways you can support Rowcroft Hospice, visit www.rowcrofthospice.org.uk.
You can join us on our social media pages, follow us on Facebook or Twitter and keep up to date with whats going on in South Devon. Got a news story, blog or press release that you’d like to share? Contact us