Brixham Harbour was closed this afternoon after two suspected artillery shells had been brought in by a trawler.

Police set up a cordon around the area just before 4pm. The area was evacuated and vessels were contacted by the coastguard and told not to come into the harbour. 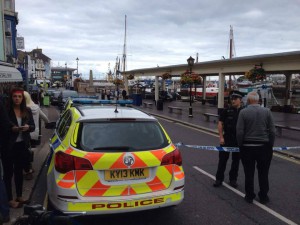 A police cordon was set up around the harbour

The Royal Navy Bomb disposal removed the devices and took them to Mansands for detonation.

The road was reopened at around 5.45pm.