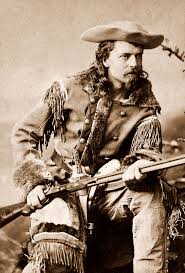 Ransom Stoddard: “You’re not going to use the story, Mr. Scott?”
Maxwell Scott: “No, sir. This is the West, sir. When the legend becomes fact, print the legend.”
The Man Who Shot Liberty Valance (1962)

In May 1904 the Wild West came to Torquay – the Newton Road to be exact – in the form of Buffalo Bill’s Wild West Show.

William F Cody (1846-1917), better known as Buffalo Bill, pioneered the Wild West Show as a form of popular entertainment on an international scale. In so doing, he laid the foundations for the birth of rodeo and successfully marketed the myth of the American frontier.

Some of the titles he acquired included buffalo hunter, US army scout and guide, Pony Express Rider, Indian fighter, and author. It wasn’t until 1883 that Cody first got his idea for a Wild West Show but, by the turn of the 20th century, he was known as “the greatest showman on the face of the earth”. Buffalo’s Bill’s Wild West Show continued to captivate audiences and tour annually for a total of 30 years (1883-1913).

On May 28, 1904 Buffalo Bill’s Wild West and Congress of Rough Riders of the World visited Torquay. 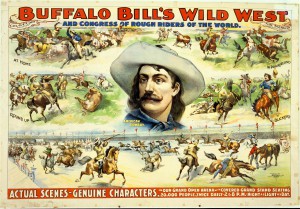 The show was a huge production. Some 560 men of different nationalities with 593 horses arrived, travelling in three of their own trains. A nine-acre field on the Newton Road was just large enough for the tents which could seat 12,000-14,000 people under cover. 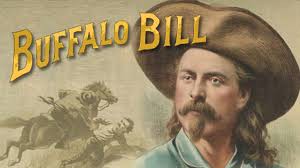 Visitors to this pageant could see main events, feats of skill, staged races, and sideshows. Many authentic western personalities were part of the show. A particular attraction was “a thrilling and daring bicycle feat of descending from a height of 85 feet and cycling through the air over a chasm of 41 feet beside the many acts, tableaux, Indian war dances, riding of wild bucking horses, and general feats of athletic skill”.

The show ended with, “A grand spectacular effect… the realistic scene of General Custer’s last battle”. Taking the role of Custer was Buffalo Bill himself. 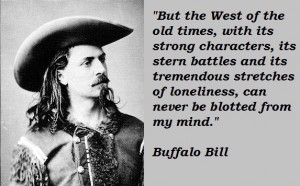 The showman was apparently a fan of Torquay. Bill announced to the press, “It is the prettiest place I have ever seen in my life. It takes the blue ribbon, and I have fully made up my mind when I retire from public life to come here for a winter. It is a corker. I have been out on Daddyhole Plain this morning and it is simply splendid; the blue waters of the bay and the giant rocks quite captured me. Torquay is different from any other place I was ever in.” The savvy impresario, of course, may have said this about every place his show visited. 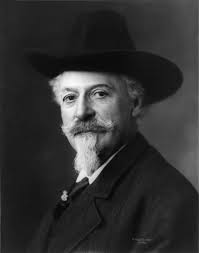 The show itself was certainly spectacular. Giving an idea of the scale, performances and excitement generated, here’s some old film of the Wild West and Congress of Rough Riders of the World along with a grandstanding Bill himself:

The show, of course, was about propagating the myth of the Wild West. It took until the 1970s for this to be questioned. For example, the other side of the story can be seen in the interesting 1976 revisionist Western ‘Buffalo Bill and the Indians, or Sitting Bull’s History Lesson’. Directed by Robert Altman it starred Paul Newman as Bill, along with Geraldine Chapman and Burt Lancaster as the showman’s biographer, Ned Buntline.

As in his earlier Korean War (or was it really Vietnam?) movie MASH, Altman satirises the legends of American heroism. Here he challenges the idea of noble white men fighting savage Indians to win the West. 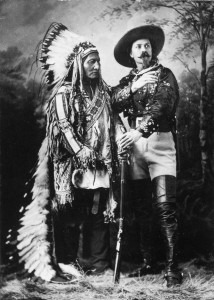 The story begins in 1885 with the arrival of Chief Sitting Bull of Custer’s Last Stand fame who joined the touring show. Sitting Bull proves to be dignified and not the entertaining stereotype of the bloodthirsty savage. Sitting Bull refuses to act out Custer’s last Stand as a cowardly ambush on brave American troopers – he requests Bill instead to act out the massacre of a peaceful Sioux village by US cavalry. An outraged Bill sacks Sitting Bull but has to take him back on when star attraction Annie Oakley takes the chief’s side.

Buffalo Bill and the Indians came out the year that the United States was celebrating its bicentennial. It predictably didn’t go down well with an American audience wanting to feel good about itself. It’s still an interesting movie, however, and here’s the trailer: