Paignton Zoo’s Great Big Rhino Project has reached a major milestone, with sponsors choosing the designs of their rhinos. Guests, including representatives of two dozen local business sponsors, attended an evening reception at the Zoo to view submissions and make their choices. 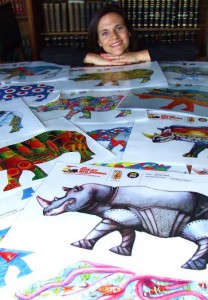 Pippa Craddock, Director of Marketing & Development at Paignton Zoo, said: “Event partners like Riviera International Centre, Breeze South Devon, Radio Exe and ESW Solutions Ltd. were also present. There was a lot of excitement and a certain amount of competition when it came to some of the designs! The good news for businesses is, it’s not too late – you can still sign up to sponsor a Great Big Rhino!”

Paignton Zoo’s Emily Rogers has been sorting and collating the designs: “We have had over 160 designs submitted, including 32 from artists in the Torbay, Plymouth and Exeter areas. Designs have come from as far afield as St Ives and Liverpool. They include African scenery, conservation themes, skeletons, humorous characters, dazzling patterns and wildlife scenes. It’s great to see so many people getting involved!”

Many artists who painted gorillas have submitted rhino designs, including Jessica Miller, Cleo Heard and Mandii Pope. For other artists it’s the first time they have taken on such a task.

The Great Big Rhino Project is using art to raise awareness and funds for Critically Endangered rhinos. Paignton Zoo, along with main event partner Wild in Art, will create a free public art trail around the streets, parks and open spaces of Exeter and the English Riviera next summer, encouraging thousands of people to get out and enjoy the spectacle.

Pippa explained: “Our mantra is Celebration, Conservation, Collaboration. It’s a very special mix. We proved with Great Gorillas that sponsorship works for local businesses and that people love to follow the trail and find the sculptures. The Great Big Rhino Project will bring together the economic, cultural and social life of the area for ten wonderful weeks.”

The Great Big Rhinos arrive on Saturday 30th July 2016. Money raised will go to Save the Rhino International and to Paignton Zoo’s own rhino work in Zimbabwe. Rhinos have been on the planet for 40 million years. There are five species: black, white, greater one-horned, Javan and Sumatran. All of these are threatened with extinction – three are Critically Endangered as defined by the IUCN (World Conservation Union). This means that they will not survive without massive and urgent action.