A car has been recovered from rocks after it was driven off Corbyn Head in Torquay in the early hours of yesterday (Sunday 21/08) morning.

The male driver died in the incident. His body was recovered by coastguards.

The car, which was left on rocks after the tide went out yesterday was recovered by having floatation devices attached to it to allow it to float when the tide came in. 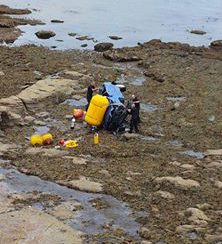 The car was then taken to the slipway in the harbour and recovered.