The fire which damaged a fence and recycling bin at a house in Northam is believed to have been started by a chinese lantern after a number were found in the area by fires crews who attended the incident.

Bideforsd station Manager Graham Rooke said: “The owner of the premises was out and his neighbour found a fire in his garden and called us. Luckily the fire was only small, damaging a fence and recycling bin, however it could have been far worse.”

Chinese lanterns are often seen in the night sky at festivals, weddings and other celebrations. 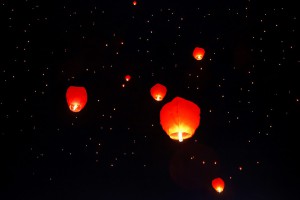 A Chinese lantern is thought to have started the fire

The fire service does not recommend their use due to the fire hazards and risks they pose to property, crops, livestock and the environment.

The National Farmers Union has received numerous reports of harm to livestock, and in some instances death, caused by cattle ingesting the metal wires contained within the lantern frames.

If a lantern does start a fire there is the possibility that the person launching it could be held responsible.