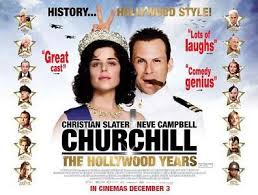 Back in 2004 the comedy ‘Churchill: The Hollywood Years’ was partly filmed in the Bay. Directed by South Devon’s Peter Richardson, who rose to prominence through the ‘Comic Strip Presents’ series, the movie stars Christian Slater, (Scream’s) Neve Campbell, and a host of British comedy talent, including Bob Mortimer, Vic Reeves, the late Rik Mayall, Harry Enfield and Leslie Phillips. 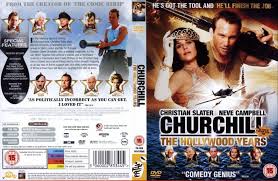 The movie is a satire on the way Hollywood has written Britain out of the Second World War by rewriting Americans in the lead roles – see films such as U571 (which had the capture of an Enigma machine being by the Americans rather than the British) and Pearl Harbour (where Americans appear to have won the Battle of Britain).

The film’s other targets are the upper-class pro-Germans who sought a compromise with Hitler.

It has Winston Churchill (Christian Slater) as a US Marine seemingly channelling Bruce Willis. His Churchill is arrogant, all rippling muscles and tattoos in a grubby white vest. Commendably Christian plays the whole thing straight. This may have something to do with, having first read the script, he confessed that he didn’t get it.

After singlehandedly repelling a Nazi invasion in 1940, he dies in the Battle of Britain, leaving Princess Elizabeth (Neve Campbell) pregnant. He is then replaced by a British actor resembling our wartime leader. Here’s the trailer:

While mainly filmed at Plymouth’s Royal William Yard, the movie’s opening shot features Brixham Harbour as Plymouth Docks. We also see Oldway Mansion doubling as Buckingham Palace, along with Powderham Castle. Cockington appears as Frothington-on-the-Waddle. There’s a nice bit on the filming of these particular scenes in this local ‘making-of’ clip. Indeed, it has been said that the commentary is actually funnier than ‘Churchill: The Hollywood Years’ itself:

We know that the war wasn’t won by Tom Hanks or Jon Bon Jovi in a submarine, and Churchill makes the point. Whether it needed a good hour and twenty minutes to tell us is debateable. 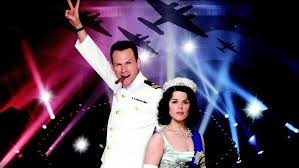 Torbay folk have been making movies since 1918 when the 90 minute movie ‘Nelson’ was filmed outside the Grand Hotel. We do keep trying and have had a couple of good films made here, such as ‘The Last Holiday’ (1950) with Alec Guinness and ‘The System’ (1964) with Oliver Reed. We all got a bit excited when we heard we had attracted a couple of Hollywood stars, but  many of us ended up disappointed. Has ‘Churchill’ improved with age? Was it a good comedy? Let us know.

One scene that is amusing, however, is the Hitler rap filmed in Oldway’s Ballroom: