A zoological park in Devon and a botanic garden in Scotland are in a race to see which of two rare and enormous flowers will open first.

Paignton Zoo in Devon and the Royal Botanic Garden Edinburgh both have Titan Arums (Amorphophallus titanum) about to bloom. The flowers can be up to 3 metres high and 3 metres in circumference.

Giles Palmer, Curator of Plants and Gardens at Paignton Zoo, said: “There are about 100 collections in the world where you can see this plant – they can go for years between flowerings, so it’s not a common sight. To have two in the country is very unusual. There’s a bit of friendly rivalry developing between us to see which opens first.”

Experts at Paignton Zoo think their plant could flower within the week. Meanwhile, horticulturalists in Edinburgh are calculating full flowering in somewhere between 7 and 14 days.

Giles is poised to head north to collect pollen from the Scottish plant. He is also looking into flying in pollen from the USA, where a Titan has recently flowered at Cornell University.

Dr Mark Hughes, Tropical Botanist at the Royal Botanic Garden Edinburgh said: “The hand pollination of this monster is a bit of a dark art, and it is all in the timing. The male and female parts of the massive reproductive structure mature on separate days, each warming up to body heat during the night to make things extra smelly. Will the Edinburgh and Paignton plants be up for it on the same night? Only time will tell. If they are in sync, someone is going to have to slice the enormous spathe open and go in with the rubber gloves…!” 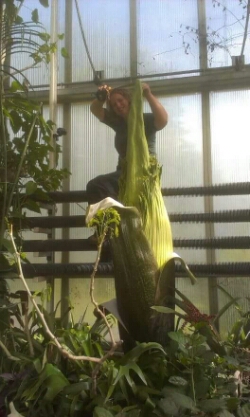 The plant – from the rainforests of Sumatra and a member of the Arum family – is classed as Vulnerable on the IUCN Red List of Threatened Plants. It has one of the largest flowers in the world; the bloom – correctly, an inflorescence – is green on the outside and bright red inside, with ribbed sides and a frilled edge. Due to its odour – said to be like rotting meat – it’s known as a carrion flower, and has been dubbed corpse flower or corpse plant. It emits the strong smell at night to attract pollinators.