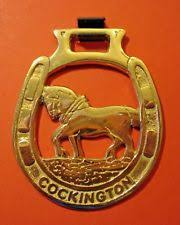 “I’ve never been to a wedding, where among the gifts the bride will get,
Someone will always give her a lucky old horse shoe.”
‘The Lucky Horseshoe – Gerry Guthrie

Do you have a horseshoe in your home? Is it nailed to your front door? How about a horseshoe door knocker? If you do, you possess one of humanity’s oldest magical charms or talismans. 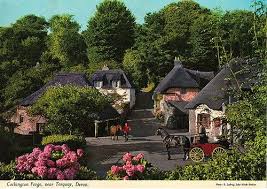 A talisman is an item thought to have magic powers and, even in secular Torbay, we still use them as protection and to bring good luck. Indeed, some are particularly associated with the town, as is the case with the Cockington horseshoe long sold at the famous Forge.

Cockington Forge is deservedly one of the most photographed buildings in the country. It’s certainly one of the oldest local medieval non-elite structures. The forge has been on the site long before its present 14th century construction and it’s believed that nearby Rose Cottage was the traditional home of the blacksmith. There’s a lot more information at the Cockington Forge site: https://www.cockington-forge.com/history-and-articles/

And there were a number of other blacksmiths across the Bay. But what we’re interested in here is how and why the horseshoe came to be seen to possess magical powers. Long after we stopped using horses in our everyday lives, what remains deeply rooted in our culture is the horseshoe as a symbol of good fortune and as an emblematic decoration in our homes.

Horseshoes were originally made from iron and beliefs about them are thought to originate in prehistoric times where the metal was used to ward off supernatural evil. Iron was considered magical because it was able to withstand fire and was much stronger than other metals. So the supernatural power isn’t in the horseshoe itself, it’s in the iron that it was made of. 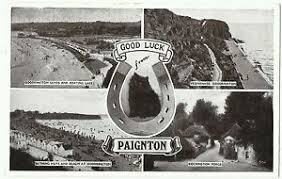 Another aspect of the horseshoe that added to its good luck was that it was commonly held in place by seven iron nails. Since ancient times, the number seven was considered very important: for example, we have the seven days of Creation (Genesis 1); “to suffer vengeance seven times over” (Genesis 4:15); Noah commanded to bring seven pairs of every clean animal onto the Ark (Genesis 7:2); the Seven Seals in Revelation: etc.

How long we have been using horseshoes is a bit of a mystery. The difficulty is that iron was a valuable commodity, and any worn out items were generally reused – so there’s not that many in the archaeological record. An early form of hoof protection was seen in ancient Asia, where horses’ hooves were wrapped in leather, and there is the Roman ‘hipposandal’ – leather boots, reinforced by an iron plate – found in British excavations. Yet there is very little evidence that indicates the existence of nailed-on shoes prior to AD 500 , and the earliest clear written record of iron horseshoes is a reference to “crescent figured irons and their nails” in AD 910. Around 1000 AD, cast bronze horseshoes with nail holes became common in Europe while the 13th and 14th centuries brought the widespread manufacturing of iron horseshoes. They were clearly valuable items and horseshoes were even accepted in lieu of coin to pay taxes. Hence, the use of horseshoes as talismans seems to be a quite late invention. 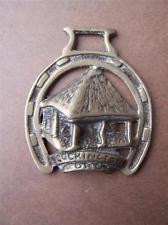 For centuries, however, metal making itself was seen as a supernatural power and the man who could turn ‘rocks’ into tools, household objects, weapons and armour was seen as having extraordinary and otherworldly abilities. Blacksmithing then became one of the great staple crafts of medieval and modern times and contributed to the development of metallurgy. The power of the blacksmith went much further than manufacturing, however. Blacksmiths were highly regarded and would serve in other roles of leadership within the village – as doctor, dentist, undertaker, surgeon – and they could hold important offices such as magistrate or church warden. They were often literate, numerate, necessarily intelligent, and with good business sense. On the other hand, in some communities, they could also be viewed as magicians or even as workers of witchcraft. 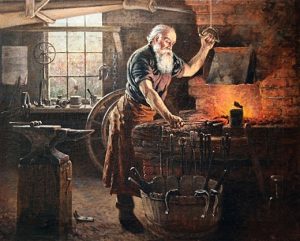 And we have the modern association of blacksmiths with romance. Medieval Blacksmiths were able to host the marriages of serfs, tenant farmers, yeomen, poorer merchants, or other craftsmen. This lucrative option ended with The Marriage Act 1753 – full title ‘An Act for the Better Preventing of Clandestine Marriage’, better known as Lord Hardwicke’s Marriage Act. This was the first statutory legislation in England to require a formal ceremony, and required marriages to take place within a church. Before that the only indispensable requirement was that the marriage be celebrated by an Anglican clergyman. Nevertheless, illicit and runaway weddings continued and those believed to be unofficial have been referred to as ‘blacksmith weddings’ since the 1500s – the most famous remnant is in Gretna Green, the historic home of the ‘anvil wedding’. 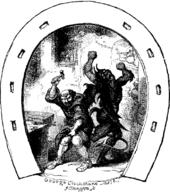 So what were horseshoes supposed to protect us from? First, there was the Devil. One well known story was that of the 10th century Saint Dunstan, who worked as a blacksmith before becoming Archbishop of Canterbury. The legend recounts that, one day, the Devil walked into Dunstan’s shop and asked him to shoe his horse. Dunstan pretended not to recognize him, and agreed to the request. But rather than nailing the shoe to the horse’s hoof, he nailed it to the Devil’s own foot. In great pain the Devil eventually promised Dunstan that he would never enter a household with a horseshoe nailed to the door. From this came the belief that the Devil’s helpers would be equally fearful – witches were so afraid of iron horseshoes, they travelled on broomsticks instead of on horseback. 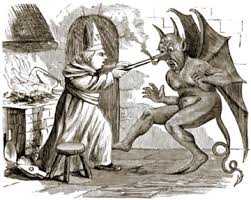 The other supernatural danger came in the form of pixies, whose mythology is believed to pre-date the Christian presence in Britain. Before the mid-nineteenth century, pixies and fairies were taken seriously in Devon with books describing peasant beliefs being filled with incidents of such manifestations. Note how horseshoes and pixies are still found together in the Bay’s tourist shops. According to folk tales, these little people existed even before migrating Celtic tribes began invading the lands around 400 BC. Locals would tell of mysterious, magical ‘little people’ living in the woods who would kidnap babies, cause misfortunes by casting spells to prevent cows from giving milk, chickens from laying eggs, and infertility in couples . Some stories lingered, such as that of a dog lost in Kent’s Cavern finally emerging having lost all his fur to the grasping hands of those subterranean dwellers.

It was believed that these primitive people feared the metal weapons of their more sophisticated human enemies, and were therefore afraid of iron. To prove their technological superiority, the settlers hung iron implements over their front doors. We were really saying, “If we can make horseshoes, we can make swords and axes”. These warnings would equally apply to human ne’er-do-wells, of course. Donald E Dossey in his book ‘Holiday Folklore, Phobias, and Fun’, goes further, “Horseshoes were doubly frightening to the little people because they looked like the Celtic moon god’s crescent.” 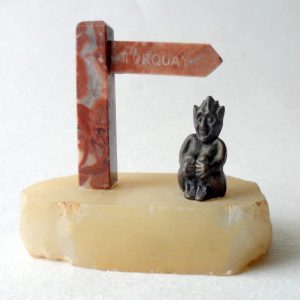 These mythical creatures were believed to have fled to ancient underground sites such as stone circles, barrows or caves. Places were named after them, such as Chudleigh’s Pixie’s Cave – according to John Britton’s ‘The Beauties of England and Wales’ (1803), the caves are said, “in the traditions of the peasantry to be inhabited by Pixies, or Pisgies, a race of supernatural beings, invisibly small”.

But why were Devon and Cornwall the areas where belief in little people survived the longest?

One possibility is that the far South West remained ‘Celtic’ for much longer than other parts of England – and we still retain a Celtic presence in our DNA. Anglo Saxon raids westwards seem to have begun about 660, with the final conquest of Devon by Wessex coming under King Aethelstan. The King expelled what he called “that filthy race” of Britons (West Welsh, Cornishmen) from Exeter in 927. In 936 there was a battle against King Howel of the West Welsh at Haldon Hill above Teignmouth where the West Welsh were routed.

They didn’t disappear, however, and the Dumnonii Britons survived – the Celtic language is supposed to be still being spoken in the South Hams in the Middle Ages. Remarkably, in a recent UK wide genetic test it was discovered that there are separate genetic groups in Cornwall and Devon to the rest of Southern England, suggesting that the Anglo-Saxon migration into Devon was limited rather than a mass movement of exterminating Saxons. 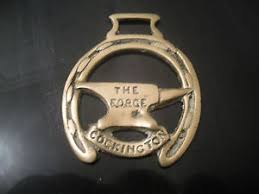 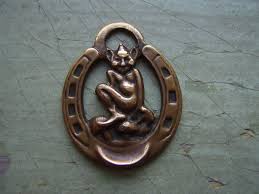 Here’s some other various assorted myths and user guidance for horseshoe-owners and finders. Note that some of these are contradictory, suggesting they emerged in different parts of the country or at different times:

• Sailors should nail a horseshoe to the foremast of their vessels to keep witches and wizards from cursing the voyage or damaging the ship.

• On their death – either though execution of through natural causes – suspected witches should have horseshoes nailed to their coffins to prevent them from returning to life.

• If guests come to a house where a horseshoe is above the door, they must leave by the same door through which they entered or they will take the luck from the horseshoe with them from the house.

• To assure good luck for the New Year, you should sleep with a horseshoe under your pillow on New Year’s Eve.

• A horseshoe hung in the bedroom will keep nightmares away.

• If you dream of finding a horseshoe, good luck will come to you.

• Finding a horseshoe is very lucky if the open space is facing toward you.

• Don’t bother with a found horseshoe unless it still has some nails left in it.

• If you do find a horseshoe, look to see how many nails still remain in the holes. The number of remaining empty holes determines how many weeks, months, or years (this varies) it will be before you will become rich or will be married.

• The number of nails left in the horseshoe equals the number of years of good luck you will receive.

• Toss the horseshoe over your left shoulder and spit after it to increase the good luck that will soon arrive.

• In your bedroom, hang a horseshoe pointing down and a woman’s latent powers will be awakened

• In your bedroom, hang a horseshoe with the opening pointing up to increase the sleeper’s masculine powers – I’m trying this one tonight…