The keys to the first council houses to be built by Teignbridge in 25 years were handed over to their new tenants this week.

The two houses in Drake Road have been built on the land that was formerly derelict garages on the Buckland Estate. Billed as ‘wheelchair adaptable’, the houses come with wider doors, large hallway and staircase and wheelchair ramps. They include high quality fittings and extras such as garden sheds, outdoor lighting and fully fitted kitchens and bathrooms. With superb energy efficiency, the homes also boast electric car charging points, PV solar panels and a heat source pump which provides low cost heating.

Outside there are secure gardens and parking spaces for two cars. The road adjacent to the new homes also offers a number of car spaces which will be allocated to residents, to offset the loss of the garages.

Doug Cramb will be moving into his house at the end of the month, with his wife and two children. Doug’s wife has lived with a disability for eight years, and his son is partially sighted.

“It will make life so much easier when my son will have his own room and his own space and isn’t falling over his sister’s things that she leaves lying around,” he said.

“My wife uses crutches inside so the space will make it easier for her to get around, and if she has to use a wheelchair inside there’s loads of room for her to do it – it’s just amazing. It has a wonderful kitchen, air source heat pump and solar panels and the flooring and finishing touches are really nice – it’s an amazing property. 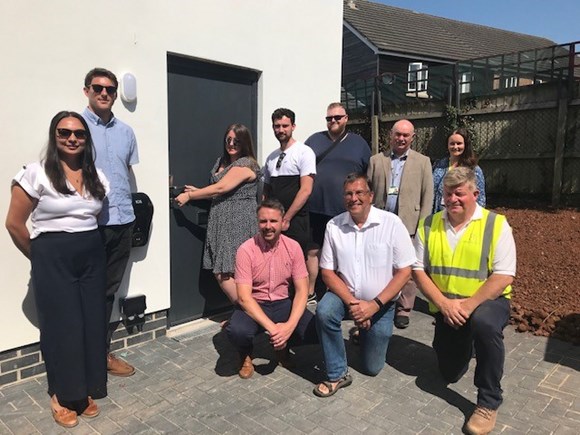 “The kids are so looking forward to having their own room, as at the moment they’re crammed into a small room, so we’re excited about being able to move into the new house.”

Amy Hutchings and Daniel Hutchings and their sons Oliver (2) and Harry (6 months) will be moving in next door to Doug, in the second property.

They’ve been in five different private rented properties since having their first child, having been forced to move for a number of different reasons, the most recent being Oliver’s diagnosis of Pit Hopkins syndrome, a very rare syndrome that can cause development delays.

“It will make a massive difference to us,” said Amy. “We really appreciate the work Tammy (the Teignbridge Housing Officer) has done and it will mean everything to Oliver because we’ll be more central. I don’t drive so we’ll be able to get out more and do more, and hopefully that will help his development as well.

“At the moment he isn’t mobile and is non-verbal. We’re hoping that he’ll be able to walk but it’s not a given, so we’re just taking every day as it comes. This will make all the difference to him and hopefully give him a little bit more independence too.

“My biggest excitement is the garden. At the moment we’ve got a concrete garden which isn’t suitable for the children, so I’m really excited to have a better garden and do a bit more outside.”

Councillor Martin Wrigley, Teignbridge Council’s Executive Member for Housing, said: “I’m delighted to be handing over the keys to the first residents of our council house scheme, and to see these houses is amazing. They will make a massive difference to people’s lives.

“The project team that has built these properties – made up of Teignbridge officers and external partners – have done a fantastic job, and I’d like to thank them all.

“It’s the first council housing for 25 years and it’s the first of many. We’ll be delivering 25 houses a year if not more and we have a pipeline of 100 on the go at any one time.”

“Prime Build is very happy to be part of this first phase of the council house development, and be part of the team. We’ve installed a large array of PV on the roof, car charging points and USB ports and sockets and installed an air source heat pump for energy efficiency in the building.”

Local Member for Buckland and Milber, Cllr Gordon Hook, said: “Teignbridge Council is determined to do all in its power to help the homeless and those in greatest need. Here is the clear early evidence of intent, and I am delighted to be associated with this positive initiative. This is the start of a big change in local housing provision.. These homes are highly environmentally efficient, and cheap to heat, an excellent project.”

A few final touches are left to be made to the building, before the tenants move into their new homes at the end of July.