Conservationists in Devon are starting to work with a large new bird species, knowing that their efforts will take many years to come to fruition.

Three lesser adjutant storks have arrived at Paignton Zoo from the Bronx Zoo in the US. The species is classified as Vulnerable by the International Union for the Conservation of Nature. The birds – one male and two female – are the only ones in the UK. Their popular name comes from their stiff, marching, military walk.

Paignton Zoo Curator of Birds Jo Gregson: “Often as conservationists we have to look many years into the future and start planning for the problems we know are going to come. We wanted to establish a back-up population before it became too difficult to bring birds together.”

These three flew from North America, though in special crates carried on a cargo ‘plane rather than under their own power. The final leg of their journey of almost 4,000 miles (5,500 kilometres) was by road from London to Devon.

Jo: “Paignton is a bigger zoo so we can keep bigger birds. We have a lot of experience with larger species like cranes and cassowaries as well as storks. They are long lived and slow to breed – any plan to help them has to take that into consideration.”

Jo will be in charge of the European Stud Book for the species. The idea of stud books in conservation grew out of their use in horse racing. Records are kept of hatchings, deaths and pairings, so that the population can be managed cooperatively and in the best interests of the species. At present there are only seven other birds across the Continent, in two collections in Germany.

The impressive-looking birds have completed their routine quarantine period and are now on show by the main lake. “This aviary has had marabou storks in it for a while, but it was built with lesser adjutants in mind and so, after several years of planning, we are very pleased to have these birds on show.” 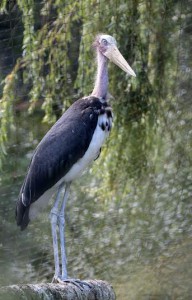 The lesser adjutant stork (Leptoptilos javanicus) is a large wading bird. Like other members of the stork family, it has a bare neck and head. It is closely associated with wetland habitats where it is solitary and less likely to scavenge than the related greater adjutant. It is found across India and South East Asia. It can weigh more than 5 kilos (12 lbs) and stand nearly four feet tall (120 centimetres). It doesn’t have a call as such, but is said to clatter its bill, hiss and moan.

“If there was an opportunity to work with the greater adjutant in the future we certainly would, and the work we have done with marabou and lessers would give us a very good head start.” Paignton Zoo Environmental Park is a registered charity. For more information go to www.paigntonzoo.org.uk or ring 01803 697500.