Every year since 2003, although this local company were actually formed in 2002, The Inn Theatre Company have produced and performed the phenomenally successful Dartmouth Shakespeare Week.

What started as an idea, among a group of friends, to put on an outdoor Shakespearean play, has grown, over the years, into a company that is admired and respected; that is affiliated to the Royal Shakespeare Company and, after each Dartmouth Shakespeare Week, donates a considerable amount of money to local charities.  They have also instigated their Theatre Bursary for Young People, an annual award of £500 so that youngsters with a love of theatre, either on stage or back stage, can pursue their dream of excellence.

Dartmouth Shakespeare Week is their flag-ship event and takes place at the atmospheric Dartmouth Castle at the beginning of August.

The very first Dartmouth Shakespeare Week production was the ever-popular (and sublimely silly) ‘Twelfth Night’. The small group of friends, with a naivety that, with hindsight, is quite staggering, did everything from acting to scenery, technical stuff to running the bar – which was a trestle table with a plank of wood and supplies from the cash and carry. And it all worked.

So well, in fact, that they decided to do it all again the following year. But with more people involved and with better planning. So a committee was formed and constitution drafted. Which was just as well, because, as with all things that take place out of doors, the weather will always have something to say about it! As you might have guessed, the weather not only had something to say, it positively roared at them…and the rain, as they say, came in sideways.

2004’s ‘The Taming of the Shrew’, whilst very wet, was successful in its own way; but the finances were an almost total disaster and the members of the newly-formed committee had to dig deep into their own pockets to clear the bills. 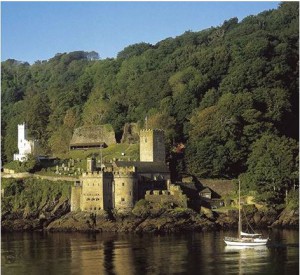 Dartmouth Castle from the river – the performance area is up by the Castle wall and the audience look up at the stage from the car park.

Undeterred, they soldiered on and started planning the 2005 production of ‘The Merchant of Venice’, having decided to veer away a little from the sure-fire comedy of Shakespeare to the darker side of his writing: although, within the context of the canon, Merchant is deemed to be a comedy!

As with any venture, the more you do something the more proficient you become. And The Inn Theatre Company certainly did that. Each year, they decided upon a play that stretched their capabilities and creativity and they asked the growing audiences to join them on that journey. The company have always believed that Shakespeare belongs to everybody and that everybody should have the chance to enjoy the stories he tells…regardless of how badly they may have been taught Shakespeare when they were at school!

They still return to the wonderful comedies but have also gone to the dark side, with amazing productions that have included ‘Macbeth’ (2010) and ‘King Lear’ (2013). It is not only the acting front that they have challenged themselves either. In the 2008 production of ‘The Tempest’, they had a one-third size galleon constructed on stage and in 2007, for ‘A Midsummer Night’s Dream’, they shared the stage with a legion of faeries and a dance troupe and ballerina.

In 2011, the then Artistic Director of the company applied for, and got, affiliation to the RSC by way of their Open Stages Project…which was extended in 2012 until the end of 2016. They have acquired a magnificent patron in the process: Michael Corbidge, a senior voice and text coach at the RSC. They presented a world-premiere of a new play, they have toured (and at the time of writing were preparing for two more performances) ‘A Midsummer night’s Dream’ from 2013 to the middle of 2015 whilst starting rehearsals for the 2015 Dartmouth Shakespeare Week production of ‘The Merry Wives of Windsor’. 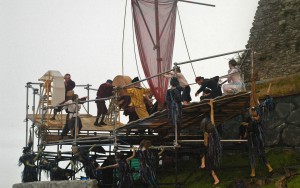 The specially constructed galleon in The Tempest. The picture is of the shipwreck at the opening of the play, with sea-sprites attacking the ship and Aerial watching from the prow.

Over the years the company were very aware of the support they received from the local community, businesses and the holidaymakers. They decided early on to return that support in kind and have, over the years, after every DSW, donated to various local charities and causes, ranging from Dartmouth Caring to the Sea Scouts, the Dave Sharp Music Foundation to Dartmouth Athletics club. The amounts vary from year to year, depending upon receipts, but the yearly amount averages out to about £1700. The recipients are decided upon by the committee from applications made by organisations.

In 2013, they set up the Inn Theatre Company Bursary for Young People as part of their charitable giving programme: now in it’s third year, the Bursary opened its doors to applicants for the 2015 award. Open to young people from 10 to 17 inclusively, who live in the South Hams area. It doesn’t matter where they go to school or college, as long as they live in the South Hams and can show a continuous connection the theatre in some form or other. It matters not if it is backstage, technical or acting, musical theatre or writing for the theatre, as long as they meet the criteria, they can apply for the Bursary, to be used for training, workshops or some other aspect that is demonstrably connected to the theatre.

If you would like know more about any the work that the company do, or apply for the Bursary or simply would like to join in (they are always on the look-out for more members) or you want tickets for this years production, simply go to their website – www.theinntheatrecompany.co.uk – and you can find out more there…and drop them a line too. 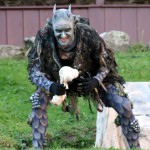 Caliban (Prospero’s monstrous servant) from the 2008 production of ‘The Tempest’. 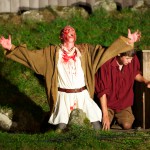 In ‘King Lear’ (2013), after Gloucester is blinded, he realises he has been betrayed by his son. 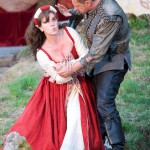 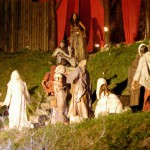 The Coven of Witches from the 2010 production
of ‘Macbeth’.