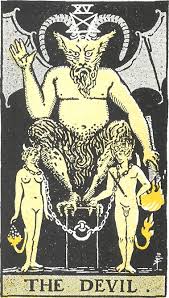 “Please allow me to introduce myself

I’m a man of wealth and taste

I’ve been around for a long, long year

Stole many a man’s soul and faith”

The Rolling Stones’ ‘Sympathy for the Devil’. (The Stones based their South West Tour from the Grand Hotel in 1964)

On the night of 7-8 February 1855 the Devil visited Torquay.

It was in far-away Exmouth that, after a heavy snowfall, people first discovered “strange cloven-hoofed footprints not from a four-legged farm animal. The creature that had made these tracks walked like a man, striding and upright” (pictured right). These indentations were then titled the Devil’s Footprints as they were interpreted as having been made by a cloven hoof. Allegedly covering a total distance of 100 miles, they travelled over houses, rivers and haystacks, were seen on the tops of roofs and walls, and were observed leading up to and leaving narrow drain pipes. From Exmouth they continued on the other side of the Exe, extending via Dawlish and Teignmouth as far as Watcombe and Barton. There were also rumours about sightings of a “devil-like figu 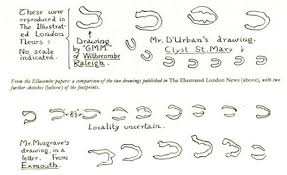 re”. Religious leaders advised their flocks that the Devil was walking the earth and they urged people to be vigilant. In response, people armed themselves and attempted to track down the culprit.

A number of explanations have been put forward for the footprints and it’s probable that they were an incidence of mass hysteria. Animal tracks, hoaxes and other natural phenomena had been misinterpreted by a population raised on myth and superstition. What the incident does show, however, is how real the Devil was to local people many decades after we were supposed to have adopted a rational view of the world.

There’s other evidence of this lingering fear. When an old house in Watcombe was being renovated in the 1970s a mummified cat was found behind the fireplace – the animal placed there to protect the inhabitants from the Devil’s evil intentions.

It was Christianity that first brought the Devil to the scattered rural communities that would become Torquay. Before the coming of the new religion pagan Torbay didn’t really have a figure that was the personification of evil. Bereavement, suffering, pain, natural disasters and the other challenges of life were certainly puzzling to the Bay’s Celtic Dumnonii people – our ancestors – yet they were seen to be caused by a variety of gods and goddesses.

By the seventh century, however, the Dumnonii were largely Christians and had imported the idea of the Devil – a supernatural entity that was the eternal enemy of God and humankind. Over the following centuries the role varied greatly, with the Devil ranging from being an effective opposite force to God to being a comical figure of fun. He also operated under a number of names – such as Satan, Lucifer, Beelzebub and Belial. He didn’t work alone, commanding a force of evil spirits, commonly known as demons, and had earthly helpers in the form of witches.

For over a thousand years the Devil was a real presence in the Bay. Beyond the outskirts of isolated and introspective villages lay a terrifying world of the supernatural with disease and misfortune being seen as being his work.

The Devil could also be found in specific places. For example, while we don’t know who built the enigmatic St Michael’s Chapel opposite Torre Station, we do know that monks and priests taught that the Devil lived in pagan temples – places that had to be taken over and cleansed. Odd natural formations similarly became associated with the Dark One – there’s a Devil’s Point rock formation in Anstey’s Cove. 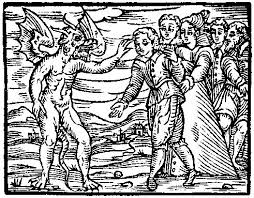 Messages about the dangerous power of Satan were promoted by local Christian leaders. In 1196 six Premonstratensian canons from the Welbeck Abbey in Nottinghamshire founded Torre Abbey when William Brewer, lord of the manor of Torre, gave them land. The founder of this order was Saint Norbert (1080-1134), “who didst quell and cast down devils”. One familiar story told many times was that of Norbert being tempted by Satan. Norbert banishes the Devil by saying, “who believes your threats, you are a liar and the father of lies!” For the medieval Christian the Devil could appear to tempt and mock at any time.

Another character trait of his Satanic Majesty comes from the Hebrew Bible (or Old Testament) where the Devil is an angel who tests humankind, the objective being to take the souls of humans. This brings us to another personal appearance in Torquay. Not far from the harbour is a limestone plateau 75 metres above the sea known as Daddyhole Plain – Daddy being old English name for the Devil.

There’s a legend that the Devil lived in a cave under Daddyhole and a story that wandering on the Plain one night is Matilda, “a proud and beautiful maiden who dwelt in the valley yonder”. Matilda was in love, but the object of her affections loved another and she took the news badly. As she walked in her misery, Matilda was confronted by “two savage hounds with eyes of fire”. Following was the Devil on a horse – referred to in the story as the Demon Hunter.

Apparently, “the arch enemy of man had chosen Daddyhole Plain as a favourite hunting ground” and local villagers were familiar with the unearthly cries of his demon hounds at night. On seeing the demonic trio Matilda promptly fainted, but woke in the company of a strange and handsome man who told her, “I come hither to bewail alone the grief of disappointed hope, and found you, fair maiden, lying senseless on the ground.” Having rapidly moved on from seeing the Hellhounds and their master, Matilda told the stranger of her rejection. He comforted her with the words: “You have been made to suff 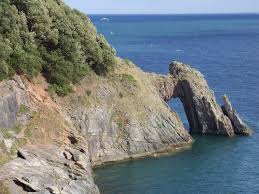 er much. Revenge is sweet.”

Clearly not being familiar with Christian tradition, she unwisely replies, “Revenge! I would barter my soul for to be revenged.” Matilda and her new friend went on to meet on many nights and Matilda came to love him, but remained filled with resentment for being rejected. With the stranger’s encouragement, Matilda stalked the man who spurned her and stabs both him and his lover to death as the sun set over Daddyhole, crying “Mine! Mine forever!” At this point in the tale, the stranger reappears and carries Matilda over the cliff edge on his satanic steed, never to be seen again.

These kinds of stories were widely publicised through pamphlets and portrayed the Devil as a trickster. They were also highly moral tales and used to reinforce social stability and order. In Matilda’s case, the message was a warning against jealousy and revenge. 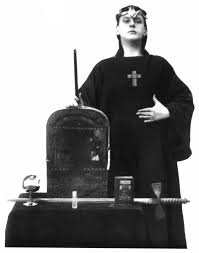 e shadows. We became more interested in ‘scientific’ investigations into animal magnetism, Spiritualism and telepathy, while psychiatrists, scientists and physicians replaced priests, exorcists and inquisitors. There were those, however, who still exploited Satan’s image to provoke and disturb. One was Torquay resident Aleister Crowley (1875-1947) – “the wickedest man in the world” (pictured right) – who proclaimed, “I wanted to get hold of the Devil personally and become his chief of staff.”

Nevertheless, Torquay’s long association with the occult did have an influence on popular culture that took the Devil far beyond a small tourist resort in Devon. The 1967 New York-set novel ‘Rosemary’s Baby’ by Ira Levin sold over 4 million copies making it the top bestselling horror novel of the 1960s. In 1968 i 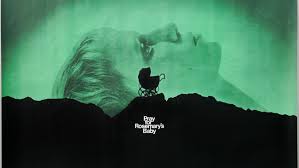 t was adapted into a movie by Roman Polanski starring Mia Farrow. In both book and movie a crucial plot device centres on a Torquay guide to witchcraft and Satanism. Sadly, the book ‘All of Them Witches’ by Torquay’s JR Hanslet doesn’t actually exist, but it gives clues that lead a pregnant Rosemary to gradually find that her neighbours make up a satanic coven and that her baby is actually the Antichrist itself.

Now we’re in the twenty-first century the Devil is generally seen as a metaphor, if mentioned at all by mainstream Christianity. Belief in the Satan has passed onto evangelical churches with their tendency to take every word of the Bible literally – Torquay’s Adventist Church in Warren Road, for instance, warns that, “Satan and his demons will leave us alone if we resist them and submit ourselves to God.“ 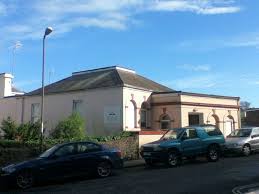 Though perhaps they have a point. Way back in 1864 Baudelaire wrote, “The loveliest trick of the Devil is to persuade you that he does not exist”. If that sounds familiar, the line was reused in the movie ‘The Usual Suspects’ in 1995, “The greatest trick the Devil ever pulled was convincing the world he didn’t exist.”

So the next time you take a late night stroll on Daddyhole Plain, don’t talk to strange men…

But let’s finish where we started, with the Stones at Glastonbury, so reminiscent of  the nightmarish vision of Hell painted by Bosch five hundred years ago…