Tom is a Senior Bird Keeper at Paignton Zoo, but went to Africa to help with the birds for which Living Coasts is famous – penguins. Tom spent eight weeks in Cape Town using his skills to help care for vulnerable penguin chicks.

Torquay’s coastal zoo has long-standing links with rescue and rehabilitation group SANCCOB. Curator of Birds Jo Gregson said: “Zoos often send trained staff to other parts of the world to assist with wildlife rescues or to work on projects. It’s a zoo role that has become increasingly-important as people and wildlife compete for space. These kinds of operations require a lot of hands-on help at all times. While the days are long and time off infrequent, it’s a very rewarding task well worth the sacrifice.”

The Cape is one of the strongholds for the African penguin, which has been declining in recent years. The problem is lack of food – research is being carried out to discover exactly why, though climate change and overfishing could both be playing their part. 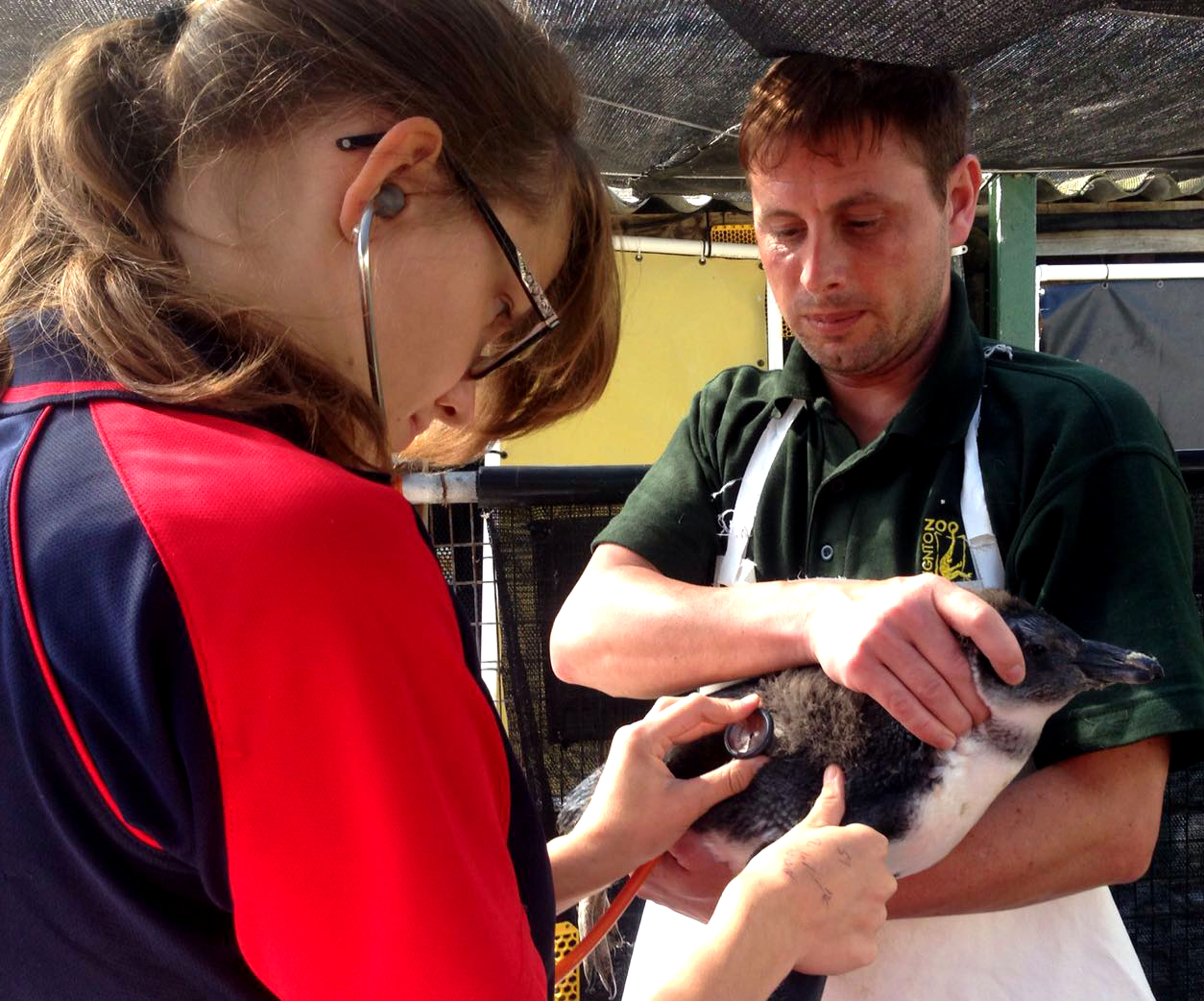 In the meantime, the penguins are being given a helping hand. The reserves are being monitored and any deserted eggs or chicks are taken to SANCCOB, where they are hand-reared and later released back into the colony.

Tom’s speciality is hand-rearing. “Bringing a chick through is satisfying – it’s rewarding. It’s not easy – you need to be patient, precise and very well organised. You keep records, you weigh them every day. It’s a responsibility – you have to be prepared to put in the hours – early starts, late finishes.”

Brixham-born Tom, 35, has been at Paignton Zoo for 18 years. He works mainly with tropical birds, but his skills transfer to penguins. SANCCOB is a non-profit organisation that works to save seabirds on the Cape. They have been in operation since 1968 and have worked with over 95,000 rescued birds. Volunteers are a vital part of their organisation and trained aviculturists are crucial especially when oil spills disrupt natural habitats.

“It was some of the hardest work I’ve done. It was very challenging! Your time management had to be spot on – you’re always thinking one feed ahead – the routine is pretty hectic! Get it wrong and you could add hours to your working day.”

During his time with SANCCOB there were up to 43 penguins being reared in the nursery – and most of the time just two people to do the work. Tom:

“We’d start at 8.00am by weighing every bird. Some were healthy, some were sick, some were wild birds brought in, others had hatched at SANCCOB. Some needed medication delivered by a mist – it’s called nebulization.

“Different birds had different feeds, depending on their weight. We’d make up the feeds and give them using a syringe. You need three hands to hold a wriggling bird and use a syringe! After that it was time to do a full clean indoors – including the ceiling!”

At 10.00 there was a fish feed, at midday another syringe feed using a fish mix that had to be blended, sieved and strained to get all the bones out. At 2.00 it was water again through a syringe and at 4.00 a final fish feed before they all went back inside.

“Some were happy to be fed, some objected. Vets came to check the birds twice a week and we’d hold the birds for them – there was quite a lot of struggling then!” And the strangest fact of all: “We had to work in silence so the birds didn’t get used to human voices!”

Tom is proud that they didn’t lose a single bird at all in his time there. “I just got stuck in and did what needed to be done.” The patience, dedication and skill of unassuming people like Tom are the most valuable assets of conservation charities like Paignton Zoo and Living Coasts.