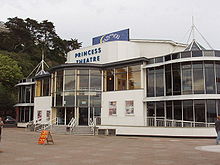 Today Dick – if he is remembered at all – is mostly familiar today from his catchphrases. Yet, for nearly two decades The Dick Emery Show dominated Saturday night television – audiences of up to 17 million a night were common during the 18 series and 166 episodes shown from 1963 to 1981.

Dick’s comedy was firmly rooted in the traditions of music hall and his humour is still admired by comic actors such as Harry Enfield and Paul Whitehouse. His influence can be seen in ‘The Lovely Wobbly Randy Old Ladies’ played by Kathy Burke and Harry Enfield, with their catch phrase “Ooh, young man!”, and in the performances of David Walliams and Matt Lucas in Little Britain. Also, Dick’s ‘elegant tramp’ can be seen in Mitchell and Webb’s ‘Sir Digby Chicken Caesar’. 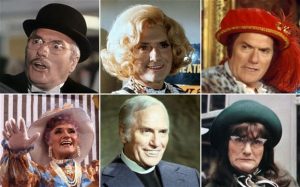 As can be seen in this Princess Theatre poster, Dick’s show focussed on the star dressing up as various characters, “a flamboyant cast of comic grotesques”. These included: a hypocritical Church of England vicar; sex-starved, menopausal, man-eating spinster Hetty; thick denim-clad bovver boy Gaylord; camp Clarence, who coined the catchphrase “Hello Honky Tonks”; crusty pensioner James Maynard Kitchener Lampwick ; genteel tramp College; and Mandy, a busty peroxide blonde whose catchphrase, “Ooh, you are awful … but I like you!” can still occasionally be heard. 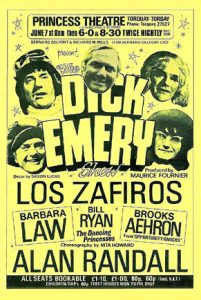 Dick also recorded several novelty records during his career, most notably “If You Love Her” which reached number 32 in 1969, and “You Are Awful” which just missed the top 40 in 1973.

Here he is on Torquay Harbourside:

Our second visitor to Torquay’s theatre land was Lena Zavaroni, a Scottish singer and television show host. With her album ‘Ma! (He’s Making Eyes at me)’ at ten years of age, she is the youngest person in history to have an album in the top ten of the UK Albums Chart. 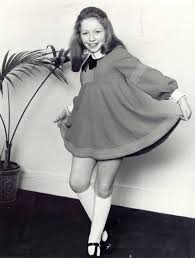