Paignton has a pier; Teignmouth has a pier. But does Torquay?

If we define a pier as a structure that water passes beneath, supported by poles or pillars, then what Torquay has is a breakwater, a solid structure down to the seabed.

It could have been so different. 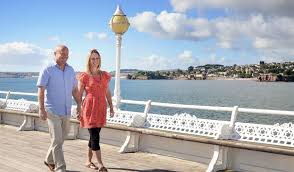 Very late in the game, in 1878 speculators hoped to construct piers at Torquay, Falmouth and Plymouth for the use of pleasure steamers and promenaders. And in 1881 and 1883 local groups planned a true pier reaching out from the Palm Court Hotel – now Abbey Crescent- along the lines of those piers that could be seen in Brighton or Blackpool.

These grand plans were all rejected. To suggest why Torquay is unusual for a tourist resort in not having a pier, we have to go back to the origins and story of that British icon. 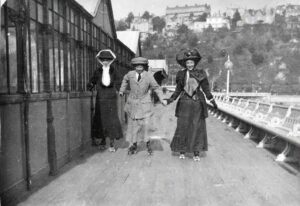 Originally piers were just landing docks. The first pleasure pier, at Ryde on the Isle of Wight, was built in 1814, and by 1850 there were a dozen piers at British seaside resorts. These were fashionable and select extensions of the seafront promenade which allowed holidaymakers a walkway out to sea, a way of being in the water but above it.

These early nineteenth century resorts were generally limited to the upper classes. This would change as the Industrial Revolution raised the income of the average working person. Improvements in transportation brought greater mobility as steam-powered railways, boats and ships created the working class holiday.

Consequently, piers became working class palaces. What had once been a setting for the gentry was transformed into a part of a new holiday culture – the ‘improving’ entertainment of classical concerts giving way to variety shows and amusement rides. 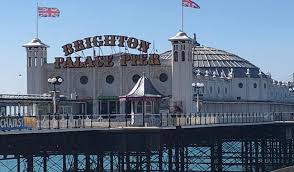 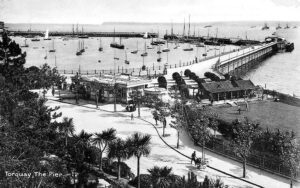 This wasn’t free, however. There was a charge just to enter the turn-style at the foot of the pier. There were fees for sitting down and entering dance halls.

For many visitors these were miracles, an oasis of abandonment where for one week a year working class people could enjoy the good life. By 1900, there were 80 fully fledged piers, with some seaside towns having two or three.

But was a pier really suitable for Torquay, fighting to preserve its elite image? 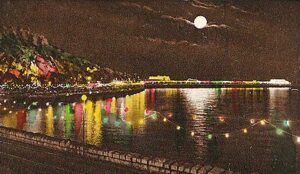 Proposals for a pier were repeatedly presented, but the local Board of Health were not enthusiastic and neither was the town. When the local Board took over the harbour in 1883 it was decided a stone pier was required for a new mooring basin. A committee then visited other resorts to view the opportunities to create something special. It wasn’t to be as the town’s conservatism asserted itself. A public meeting was held which even turned down the modest offer of a covered band stand. Then a poll of rate payers was undertaken. This rejected the proposal to construct a full scale pier by 3,194 to 1,296. In its place came a much more limited scheme that featured a small pavilion. This was grudgingly accepted. Torquay was not to have a grand pier that may have attracted unsuitable visitors.

Work on the pier commenced in 1890 as a simple mass concrete groyne. A steel lattice girder and timber structure was added in 1894, followed by a landing quay on the seaward side of the pier-head in 1906. 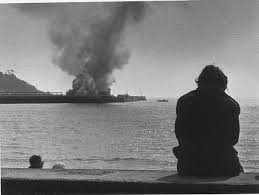 Our own Princess Pier is a metaphor of tourist resorts across the country. During the 1960s and 70s the package holiday was born and many seaside towns fell into a steady state of decline, some taking their pier with them. At least we retain a pier of sorts. In April 1974 fire gutted ‘The Islander’ bar and due to damage to the underlying timber, the building was demolished to deck level. Torquay’s first pavilion was never rebuilt…