A dolphin has died after becoming stranded in Brixham Harbour yesterday.

Two dolphins, a mother and calf were seen in the inner harbour. It is reported that although they were swimming strongly, when the tide went out, the female became stranded on rocks and later died. 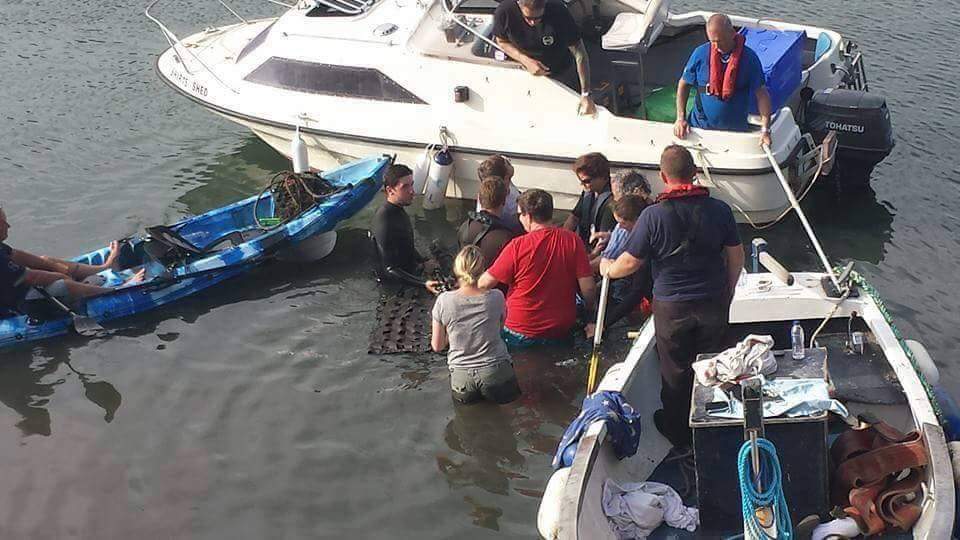 “With guidance from BDMLR’s head office, the local harbour authority were able to get staff in the water to block the dolphins from coming further into the shallows and encourage them towards the deeper water.  Sadly the adult, assumed then to be female, continued to attempt to get into the shallows and subsequently stranded on rocks. She was in a severely malnourished condition and lacking any strength.

“By this time BDMLR volunteers were on the scene and together with harbour staff and other locals they were able to hold the adult in a tarpaulin in the water for a while, but she got free and sadly stranded again, subsequently passing away while the team cared for her.

“Meanhwile the young dolphin had been swimming strongly but had beached a couple of times and got itself back into the water on the rising tide, being protected and monitored by kayakers.  As the length of it suggested that it is probably no longer maternally dependent (it was larger than the average size of weaned calves), the team planned to uplift the youngster and take it further out to deeper water by boat for release but it evaded capture.

“It is still in the harbour, swimming strongly and porpoising so we are hoping that it will find it’s way out to the open sea this evening to find a pod to socialise with.  Local volunteers are on stand-by and will be monitoring its progress,”

It followed with an update that a pod of dolphins were seen outside the harbour:

“Brixham Harbour Office have confirmed this morning that there have been no sightings of the younger dolphin in the harbour today. We have also learned that there was in fact a pod of at least 8 dolphins outside the harbour yesterday morning, so let’s hope that it will find them soon.

“The adult’s body is currently being stored awaiting collection by the Cetacean Strandings Investigation Programme who will perform a post mortem examination to determine whether there was an underlying problem. The report will be published by them in due course.

“BDMLR would like to thank all in Brixham who showed concern for the dolphins and especially to all those who have helped and are currently involved in the on-going rescue of the youngster,”