Police have seized drugs believed to be spice, a quantity of cash and other items from an address in Paignton today, Thursday 22nd March.

Three people, two men and one woman have been arrested and are now helping police with their enquiries. 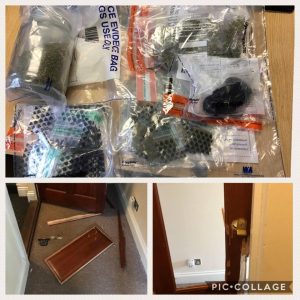 Torquay Police posted on Facebook: “Following receipt of community intelligence, officers from the Torquay Neighbourhood Team executed another Misuse of Drugs Act warrant at an address in Paignton earlier today.

“Officers forced entry and seized a large quantity of what we believe to be Spice, a class B controlled drug, a quantity of cash and other items indicative of involvement in drug dealing.

“Three people have been arrested and are helping officers with their enquiries. These are two males aged 22 and 24 and a female aged 21.

“Spice is a seriously harmful substance and poses a significant threat to users as well as driving the criminal activity that takes place to fund habits.

“This represents the commitment the Torquay Neighbourhood Team has in relation to keeping Torquay safe, actively targeting drug dealers by bringing them to justice.

“If you have any information about crime in your area, please report it by calling Crimestoppers on 0800 555111, calling police on 101 or by emailing the officers directly – torquay@dc.police.uk

“Your details will be kept anonymous. This is not about being a ‘grass’, its about keeping your community safe. With you help we can achieve significant success in the fight against crime.”