Update: Police have confirmed that sadly one person has passed away.

A spokesperson for Brixham Police said: “At approximately Midday today, an incident occurred in the sea, just outside Brixham harbour whereby a small speedboat containing 4 persons overturned. All persons were rescued from the water and received medical treatment; sadly though, one person has died.

“Enquiries are ongoing and we would appeal for anyone who was in the area at the time, either on the water or walking along the cliffs or seashore and witnessed the incident, to call us on 101 and quote log number 326 02/05/2015″

Emergency services were called to Brixham at around Midday today, following reports of a speed boat capsizing. 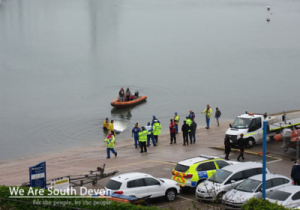 People in the area have reported seeing jetskiers assist with the rescue of some of the people onboard the speedboat.

Early reports suggest one female was trapped and was rescued by the coastguard, she was taken to hospital. Her condition is currently unknown.

Emergency services are still present in the area near the breakwater. Where some of the area is still cordoned off. 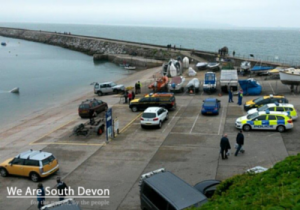 The boat remains capsized in the water.