Emergency services were called to a man on a roof in Market Street, Torquay this afternoon.

Police, ambulance and fire crews were at the scene just after 1.30pm.

Police closed the road and cordoned off the area whilst the man was on the roof.

The man could be seen sitting on the edge of the four storey building next to ‘Old Skools’ cafe bar. 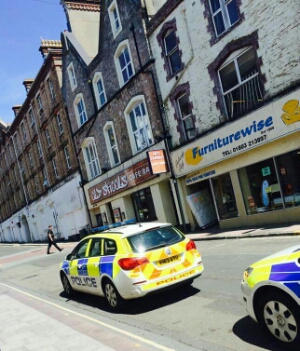 Police at the scene as man sits on edge of roof

The road reopened just after 2pm after the man got down safely.

Members of the public at the scene praised the quick action of the police.