Police have released An Evofit image of a suspect wanted in connection with a burglary in Exmouth.

More than £2000 was stolen from an elderly woman by a man who was discussing tree cutting with her.

The incident happened on Friday 12th February. The woman realised her property had been searched when he left. A number of wallets were stolen containing more than £2000 in cash. 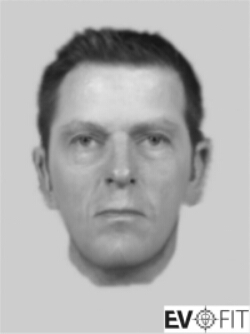 The suspect is described as white man, around 5ft 6ins, of slim to medium build, with short dark hair and with wearing dark clothing. He spoke in a deep gruff voice with an Irish accent.

Anyone who recognises the man pictured, or has any information is asked to call police on 101 or email101@devonadncornwall.pnn.police.ukquoting ref CR/010950/16