A Naming and Dedication ceremony took place at Exmouth lifeboat station for the second D class lifeboat provided by Pauline Smith, in memory of her grandfather, George Bearman.

Approximately 250 people attended the event on 20th May, which was held inside the all-weather lifeboat hall, in case the weather worsened. At 2pm the Exmouth Town Crier, Roger Bourgein announced the start of the ceremony following entertainment by the Exmouth Shanty Men. Exmouth Lifeboat Management Group Chair, Darryl Nicholas welcomed guests and invited Pauline Smith to the stage to tell the story of George Bearman.

Pauline wished for a lifeboat to be named after her Grandfather, one of five Coastguards who lost their lives at sea on service off Wells-next-the-sea, Norfolk on 22 February 1898. In total, 11 men lost their lives in treacherous conditions attempting to reach the HMS Alarm, a torpedo gun boat. George Bearman was 38 years old. After the 10 years’ service the original George Bearman inshore lifeboat served, saving 28 lives, Pauline was eager to fund a second to continue saving lives at sea in Lyme Bay.

Pauline handed over George Bearman II to RNLI Council member, Martin Gregory who accepted the D class on behalf of the charity. After praising the station, Martin in turn handed the inshore lifeboat over to Exmouth Lifeboat Operations Manager, Kevin Riley MBE on behalf of the station. The formal Naming and Dedication service was led by Reverend James Hutchings and a lesson from the Bible read by Shop Manager, Pat Atkinson with Exmouth Town Concert Band accompanying the hymns. Reverend James proceeded to bless the new lifeboat with holy water and a few guests sitting in the front rows were included, too.

Pauline was invited to officially name George Bearman II with champagne. Molly Stott, daughter of Crew volunteer Roy Stott presented Pauline with a bouquet of flowers who was in turn presented with some flowers by Martin Gregory. 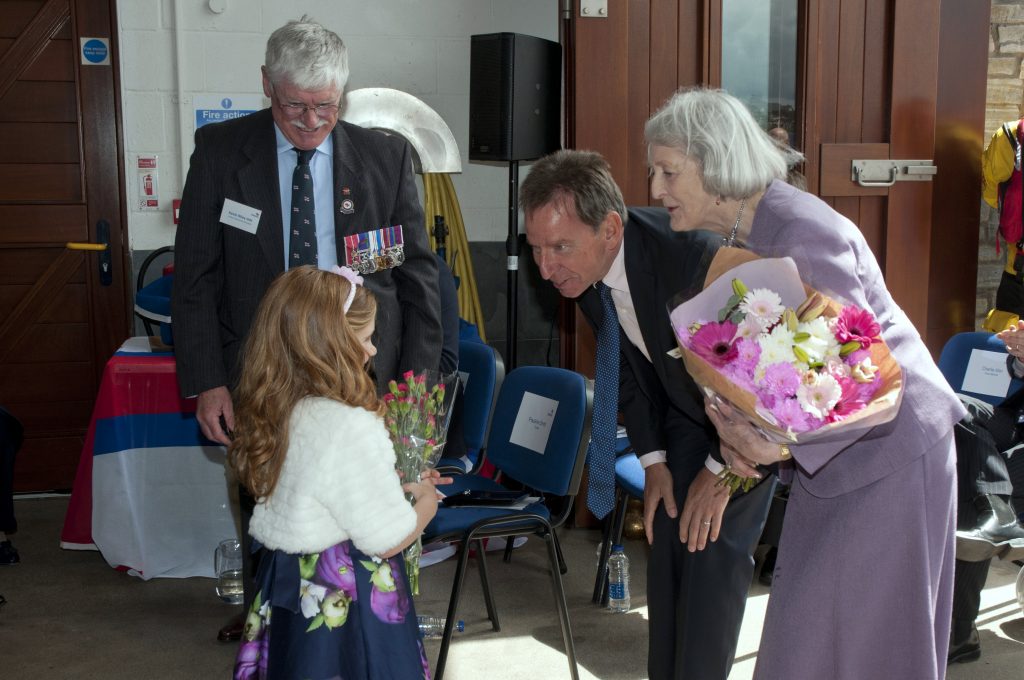 The newest Crew volunteer, Charlie Allen thanked Pauline on behalf of the Crew and presented her with a digital photo frame containing photos and videos from the arrival day. He said:

‘I know that George Bearman II will look after me and her Crew, as we will look after her. We really appreciating Pauline providing the second D class lifeboat and we at Exmouth lifeboat station feel very humbled and honoured.’

Area Lifesaving Manager, Nigel Jones thanked the station, fundraising and shop volunteers for their continuing dedication in their various roles. At precisely 2.45pm, Crew’s pagers were activated to simulate a shout and to demonstrate the abilities of George Bearman II to the guests. The event concluded with a cream tea for the guests and the cutting of a celebration cake.