On 28 July at 6.25am, Shannon class lifeboat R and J Welburn was tasked following a Pan Pan call for help from Lyme Bay at 5.30am, with no further communication.

At 6.48am, whilst travelling eastwards towards Sidmouth, Crew were given a more precise location by Naval frigate
HMS Kent who were close to the scene. Once on location, 18 miles south of Lyme Regis at 7.25am, Crew discovered a 24′ wooden yacht with two people on board, with a broken mast.

With 2-3m swells and confused sea conditions,HMS Kent assisted in passing over a Crew volunteer into the yacht, so a tow could be established. At 10.08am, the Shannon class lifeboat towed the casualty vessel into West Bay harbour. 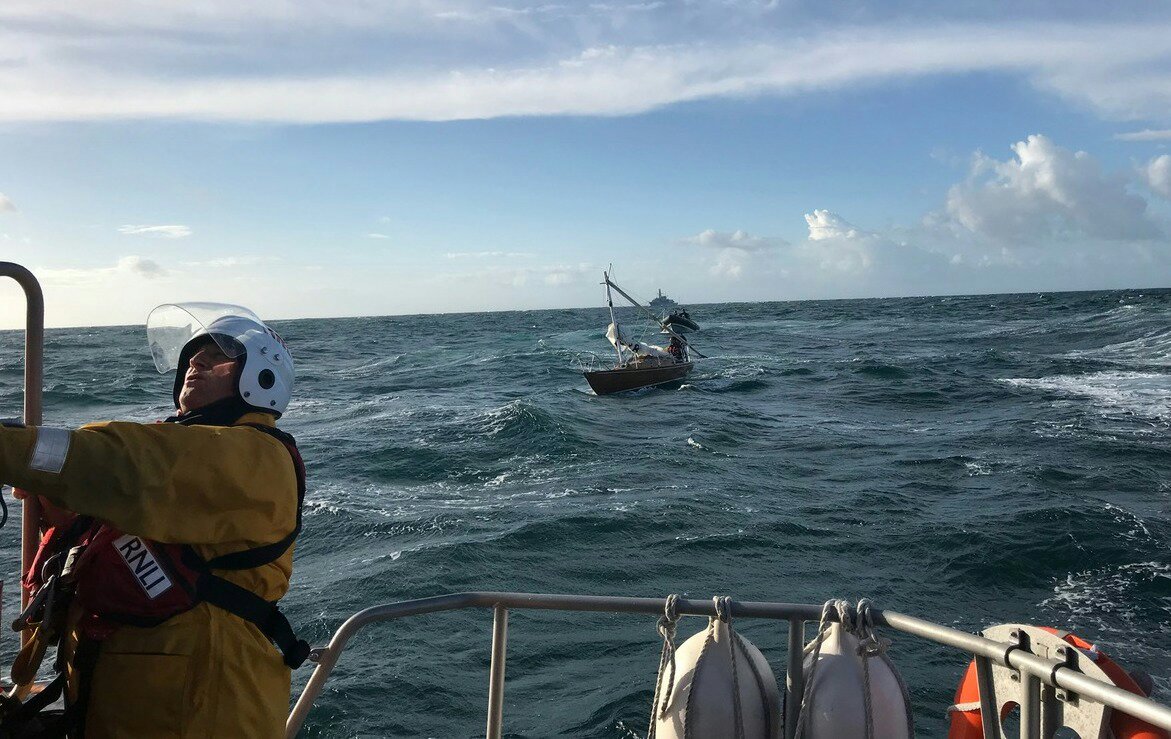 Once the casualties were safely in the harbour, Crew made their way back towards Lyme Regis, arriving at 11am R and J Welburn was due to take part in an exercise later in the afternoon as part of Lyme Regis Lifeboat Week, so a shorter demonstration was offered for our flank RNLI station’s supporters.

Crew volunteers left Lyme Regis at 12.14pm and arrived on Exmouth beach at 2pm. After recovery, wash down and refuelling, R and J Welburn was ready for service again at 2.50pm.

Second Coxswain, Scott Ranft said: The casualties were competent and fully equipped for their passage to Chichester. They did the right thing to send out a Pan Pan call for help at the time they did, as their antenna was on the mast which had broken in two and lost signal after that.

“The Crew performed very well and we were pleased to make an appearance Lyme Regis Lifeboat Week. Sometimes we can’t make all public relations requests as our operational requirements have to take priority, but we were lucky to be tasked to their area this morning. We wish Lyme Regis a very successful Lifeboat Week.”