The first was during a performance by Mikron Theatre Co. and whilst the BBC were filming an interview about a rescue story for Countryfile. 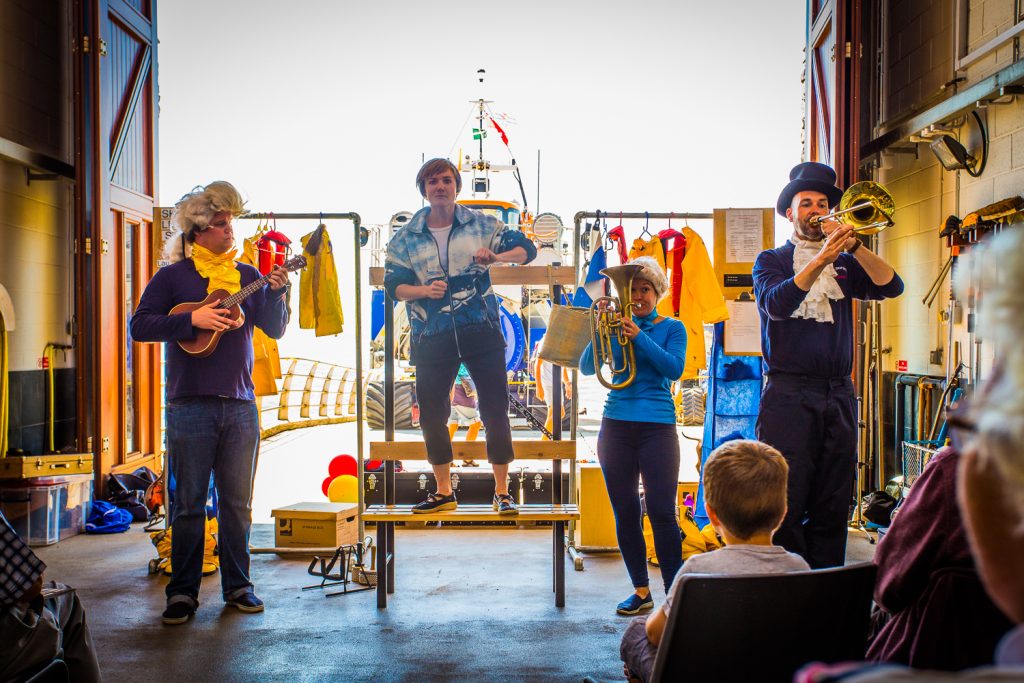 Both the Shannon class lifeboat R and J Welburn and inshore lifeboat George Bearman II with their launching systems were already positioned on the ramp, as the boat hall was transformed into a theatre for the 2pm play. Crew volunteers Robert ‘Tommo’ Thompson, Andy Stott and Charles Swales were about to change into their drysuits and lifejackets for an interview on the ramp with BBC presenter, Keeley Donovan.

The D class lifeboat was tasked at 3.25pm to the river Clyst where two men and a woman had reported to be in difficulty when their 18’ Bayliner went aground. Within 30 minutes, Crew volunteers discovered the vessel further upstream, off Topsham as the casualties had managed to push themselves afloat safely.

The Crew returned to the lifeboat station and continued the interview until 5.45pm when they were tasked for a second time. Still dressed in their kit in the warm weather, the team returned to the river Exe near Topsham. A second Bayliner (21’), this time with four adults and two children had called 999 for help after finding themselves aground on a mudflat. Due to the ebbing tide and sticky mud, the volunteers were only able to position George Bearman II 15 metres from the casualties’ location. Crew volunteers checked on their welfare, handed over bottled water and it was agreed to launch again to attempt rescue in a rising tide.

At 9.09pm, a different team of Crew volunteers launched to check on the casualties’ welfare in daylight to assess the situation. Helm, Guy Munnings describes the scene:

‘When we reached the location at around 9.30pm, there was still not enough water in the river Exe to tow the vessel off without damage. The casualties were equipped suitably, had warm clothing and were happy to wait a bit longer for assistance. At 11pm, once the tide had lifted, we towed them towards Starcross and then escorted them to Exmouth Marina where they made way under their own steam.’