A mobile phone call to the Coastguard prompted the launch of Shannon class lifeboat R and J Welburn last Friday.

A fishing boat from Torquay had suffered mechanical failure and the lone fisherman was unclear of his location.

The  Shannon class lifeboat and Exmouth RNLI Crew volunteers were on scene, nine miles south east of the lifeboat station, within 26 minutes.

A Crew volunteer was put on board to attempt starting the failed engine, the fishing boat was then towed to Torquay.

On arrival at Torquay, the casualty was taken by Marina staff to his berth. 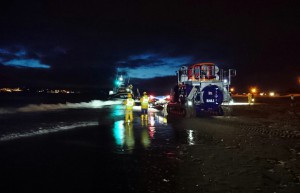 “During the tow, the Crew volunteer on board demonstrated how to use his on-board VHF radio. This would have been a more reliable method to call for help and his location could have been picked up more precisely, making it easier for us to locate him.

“VHF Communication allows the all-weather lifeboat to direction find on a casualty vessel which will save time in a real emergency. We strongly recommend this method to call for help as mobile phone coverage is extremely patchy this far out at sea.”