The 2019 Dinosaur Trail, organised by Exmouth’s Town Team, was officially launched by Town Mayor, Councillor Steve Gazzard on Saturday 25th May during the Exmouth Festival when a real ‘live’ Tyrannosaurus-Rex was on hand to supervise the process!

Councillor Gazzard said ‘It is a great privilege for me to relaunch the Dinosaur Trail and I am confident it will be a permanent major attraction and dynamic feature of our town. I would like to thank the Exmouth Town Team who made this happen, especially Jenny Clark and Gayle Robson who spearheaded the project and I look forward to seeing adults and children alike enjoying the facility.’

Locals and visitors alike will have noticed that several of the very popular life-size dinosaurs have been placed back in positions around the town, mainly in the Strand, where it is hoped they will make their permanent home. Several are displayed at local business premises. 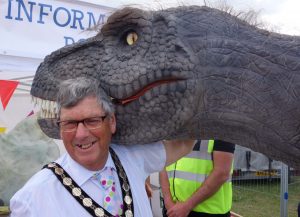 In addition, 30 small dinosaur brass-rubbing plaques are currently being installed in locations right around Exmouth. There will be two dinosaur trails in place – the ‘Town Trail’ which is around the town centre and the ‘Explorer Trail’ which ventures out further afield. Both trails feature 15 plaques to locate and explore and along both there will be many life-size dinosaurs, as well as those featured in the Strand.

Children’s Activity Packs will be available to purchase that will contain a brass-rubbing booklet, sticker, crayons and an official trail guide. On completion of the activity pack, children will be awarded with a special badge to commemorate their achievement. 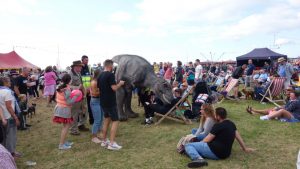 The booklet and map can be also be downloaded free from the forthcoming dedicated dinosaur web site.
The reinstallation of the dinosaurs has been met with much enthusiasm by Exmouth residents and visitors to the town and it is predicted that, as before, they will make a very popular attraction, both from an educational aspect and a tourist perspective by highlighting Exmouth’s Jurassic history. More information can be found online here: