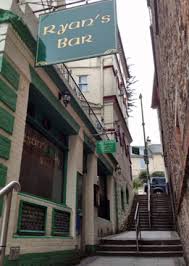 It looks like Ryan’s Bar is joining the long list of Torquay’s closed pubs – along with the Upton Vale, the Pelican/Parrot, the Alpine, the Clarence, the Mousetrap, the Falcon, the Railway, the Post Horn, the Bristolian and the Sportsmans.

The number of pubs in the UK has declined year on year since the 1980s – the Lost Pubs Project listed 28,095 closed pubs in April 2015.
Various causes have been suggested for the loss of the pub, including: the cost of drinking in pubs compared to the availability of cheap alcohol in supermarkets; the failure of some establishments to keep up with customer expectations; the smoking ban of 2007; competition from foody-pubs; the economic climate; a more health conscious public; better entertainment at home; and changes in demographics.

Indeed, there may be a long road to the inevitable closure of pubs such as Ryan’s – from being a long-treasured community asset to the haunt of a town’s less sophisticated drinkers. We can also look at another town centre pub that has changed over the years.  In 1837 Joseph Reed opened the Castle Inn in Binney’s Orchard. This remained a successful and popular free house until 1974 when it was sold to Heavitree Brewery. At the time it was described as “the most valuable public house in south Devon” with annual sales of 1436 barrels of draft beer and 223 barrels of bottled beer. The inn contained a public bar, off licence, the ground floor Castle Lounge, a basement lounge bar – a popular disco – and three staff flats. Ready to cater for new tastes in the market, in 1981 the Castle opened Plonkingtons’ Wine Bar. A particular success was the Sunday Special where double spirits sold for 60p. During the 1980s it acquired a reputation for being “drug troubled” and closed for a few years. It’s now reopened and certainly seems busy at all times…

Ryan’s long-expected demise came a few weeks ago. An all-night birthday party ended up with police breaking into the premises after a party goer was seen going home covered in blood early on a Sunday morning.

Abbey Road was closed for several hours after the alert was sounded by a member of the public. The Police, who were called at around 8am, say initially no one would let them in so they had to force entry into the premises where the party was being held, above Ryan’s.

They found some people hiding in the building but no weapons. Three people were injured and at least one woman went to Torbay Hospital. Backup was summoned from specially trained officers from Exeter, and ambulance and fire service attended amid reports that people may have been hiding on the roof.

Inspector Richard Livingstone said there was serious public disorder and allegations of an assault causing grievous bodily harm, “It was apparently a private birthday party upstairs which got out of hand and an argument resulted in a group of 15 to 20 local people being involved in some sort of melee. People have been injured but nobody is willing to give us evidence. They could have been serious but are mainly superficial. Some were very drunk and they would not let us in so we had to break in. We have taken photographs and details and will be checking CCTV in the area.”

Abbey Road was reopened at 11.30am that morning and, since then, Ryan’s Bar has been closed. It looks unlikely to reopen any time soon and this could be the sad end of a town centre institution – the Old London Inn.

The Old London once flourished as a public house and had a fine reputation. Originally, the only entrance was half way up the steps opposite the Gallery entrance of the Theatre Royal. Accordingly, the Inn counted among its patrons the audience, actors and staff of the Theatre, and so has seen many of the famous stars of the world of Victorian and Edwardian entertainment. It once had a public bar, a private bar, a smoke room and a Bottle & Jug. When the building changed into a cinema in 1933 a good deal of trade was lost.

In 1992 Harold Browning was interviewed. Harold’s father was the landlord during the 1930s and he remembered how the London was a Beer House which could only sell beer and cider. The cider came as either sweet or rough, the latter being scrumpy and known as “lunatic broth”.

To quote Harold, “It may well be that the expression ‘legless’ came from drinking rough cider. People who could normally drink a fair amount of beer, on drinking rough cider simply lost the use of their legs… they simply collapsed, perfectly coherent, but absolutely unable to stand.”

“Our supplies were delivered by draymen driving horse drawn wagons,” recalled Harold. “As it was customary to give each coach driver a pint we reckoned that they each drank at least 20 pints a day… Our customers consisted mainly of working men, some of whom came in still dressed in their corduroy trousers with leather straps around the knees, straight from digging the roads by pick and shovel…

“Occasionally an American warship would come into the Bay and their sailors, coming from Prohibition in the States, soon got very drunk and it was a common sight to see their naval police collecting up the drunks and literally throwing them into the boats in the inner harbour”.

This wasn’t the only London Inn in Torquay, however. There were others – one in Pimlico which has long been demolished. The other London Inn, also demolished, has now been re-established and stands on the site of one of Torquay’s original inns.

Back in 1774 Andrew Brice, an Exeter printer, wrote in his Grand Gazetteer that “at Tor Kay is a village and an inn or two”. Actually, there were five “houses of entertainment” servicing a population of around 500. They were licensed “for man and beast”, the oldest of which seems to be The Bird in the Hand. The landlady, Betty Cole, was noted as never giving credit and the motto on the hanging sign stated:

“A bird in the hand is better far,
Than two birds in the bushes are”.

The Bird in the Hand became the London Inn and then Wolfinden’s London Inn in 1840, and eventually the Royal Hotel. It’s now back on around the same site as the original London Inn, using the same name and run by Wetherspoons.

Founded in 1979 by Tim Martin, Wetherspoons now owns over a thousand outlets. Known for low prices and long opening hours, the chain often converts large, unconventional premises into pubs – in this case an old bank. Yet, it’s arguable whether a Wetherspoons is really a pub in the traditional sense where “everyone knows your name”. Or are Wetherspoons really just drinking places/restaurants? Whatever your view, along with other large chains they are certainly popular and may be replacing the traditional ‘Local’ across the country. Sadly, as we see in the demise of Ryan’s, this generation may be the last to have a real Local to go to…