Fire fighters were called to a fire at a chip shop in Teignmouth this afternoon. 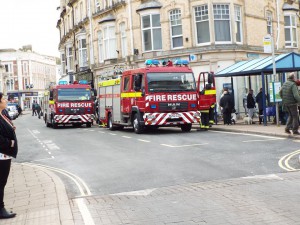 The fire service were alerted to the fire in Regent Street, just after 2pm after receiving numerous calls reporting black smoke coming from the area. 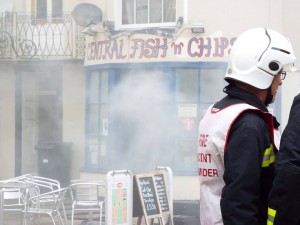 Two fire appliances were initially mobilised to the incident, followed by a third, which crews requested for manpower.

Once in attendance crews located a fire within the extractor flue of the deep fat fryer on the ground floor.

Crews got to work extinguishing the fire.

The coming months will see the first steps taken to implement the Brunswick Street Development and the wider regeneration plan for Teignmouth. Key elements of the regeneration include: The build…

Conscientious staff at Teignmouth Specsavers are getting into the season of goodwill by raffling off festive hampers for Rowcroft Hospice. The hampers are jam-packed with goodies donated by the sto…

A brand new record shop has opened up in the heart of Teignmouth town centre today. The Sound Preservation Society Records is tucked away on Fore Street and offers a great selection of used records, a…