Fire crews were called to a property fire in Torquay earlier this afternoon. 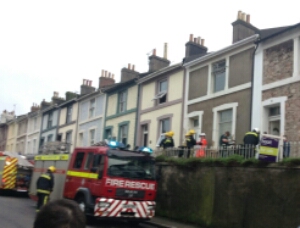 Two fire engines attended the incident, one from Torquay and one from Paignton.

A neighbouring property reported the fire at around 3:40pm.

Crews extinguished the fire. Damage was confined to the chest of drawers and living room.

3 adults and 1 child were treated on scene by paramedics but not taken to hospital.