The fire service was called to reports of a fire in Victoria Road, Torquay earlier this evening.

Three fire engines from Torquay and Paignton were mobilised to the fire just before 7pm. 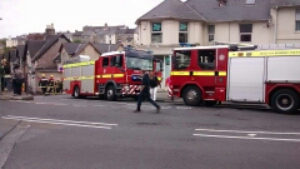 Fire crews at the scene

A spokesperson for the fire service said: “On arrival crews discovered there was a fire in a ground floor flat of the three storey building which was used as a retail shop and flats.