The fire service attended the farmers market in Newton Abbot today following reports of a bull that had been trapped on a metal gate.

One appliance from Newton Abbot attended the incident and the bull was released unharmed using hydraulic cutting equipment. 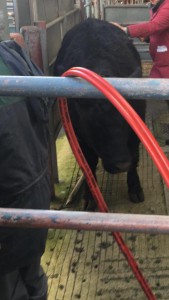 A spokesperson for Newton Abbot Fire station posted on Social media:
“At 13:07 today (02 Mar 2016), one appliance from Newton Abbot was requested to attend a Bull which had become stuck in a cattle crush at the town market. One of its legs was trapped over a metal bar on a gate and it could not move.

“Crews were able to release the animal unharmed using hydraulic cutting equipment to remove one of the metal bars on the gate. It’s got much more uses than just for Road Traffic Collisions!”