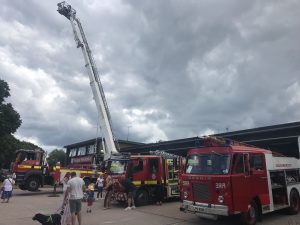 It seems inevitable that in today’s climate that there have to be cuts to accompany lack of funding to maintain vital public services but one which is close to the heart of us here in South Devon is our Fire and Rescue Service.

Some devastating fires lately in the bay, could have been much worse if it were not for our heroic men and women of Our Fire and Rescue Service. But with 7 options on the table which is out to public consultation, it seems inevitable that the cover in Torquay will be cut by 33%. 6 out of the 7 options hold the cutting of the cover for Torquay.

The other threats come to Ashburton where the station is proposed to be shut. Changing the status of the station to day crew only at Paignton and on call night crewing at Brixham, Dartmouth and Teignmouth amongst others. In all a total of 8 station closures, 8 less engines, a further 17 stations effected with on call changes and the introduction of roving fire engines are all up for discussion.

The 8 stations are set to be closed at Appledore, Ashburton, Budleigh Salterton, Colton, Kingston, Porlock, Topsham and Woolacombe.

The service is holding public consultations in various areas and the ones left which directly effect us here in South Devon are as follows:

However given the timings of these consultations it is evident that many people are unable to attend due to work commitments, but that doesn’t stop you having your say. There is the availability to give your feedback online by visiting www.dsfire.gov.uk .

Giving feedback in any other way, including social media will not go into the documentation that forms the consultation and therefore has no effect on the final decision.

Having visited the service open day at their headquarters in Clyst St. George I was assured by the team carrying out this consultation that at the end of the meetings if enough information has not been gathered they have a few spare weeks in which they will return to places for feedback from the public. However with such a vital service, why should we leave it to chance? It’s important that we all give our feedback on this online or in person.

Take 10 minutes out of your day now and fill in the online form. Let’s hope that the correct decision is made and that no lives are put at risk by any changes that are set to come.