This is the story of how two gigantic Torquay paintings ended up in a Pittsburg museum with the assistance of Andrew Lloyd Weber.

St. John’s church started in 1823 as a chapel-of-ease to the parish church at Tormoham. The current church had been commissioned as far back as 1861, but plans were still being revised 20 years later. So, if we date the completion to the dedication of the bell, the current Gothic Revival building can be said to have been finished in 1885. The architectural historian Nikolaus Pevsner really didn’t like the church tower which he described as “fatally ugly” and “a great pity considering the view of Torquay from the harbour.” 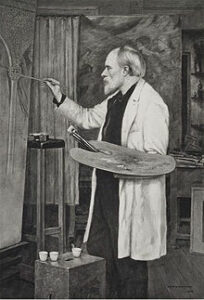 For the chancel, in 1887 St. John’s parishioners commissioned two huge mural paintings – seven by ten feet each – from the artist Edward Coley Burne-Jones (pictured above). These two paintings are now known as The Nativity and The King and the Shepherd. 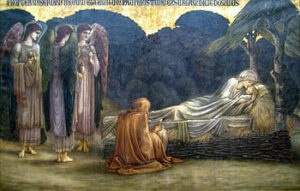 The pre-Raphaelite artist Edward Burne-Jones (1833-1898) was probably the most admired and respected artist in England, and had studied with the self-taught painter and poet Dante Gabriel Rossetti. Burne-Jones had a love of the art and poetry of the Middle Ages and a desire to reform the world he saw by returning to pre-industrial principles of craftsmanship. He wrote to a friend, “I mean by a picture, a beautiful, romantic dream of something that never was, never will be, and in a light better than any light that ever shone, in a land no one can define or remember,–only desire.” 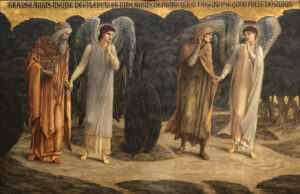 Accordingly, these paintings are of a traditional Christian subject, almost of the medieval style popular in Europe during the 13th and 14th centuries, the time of the Black Death. Art historians have suggested that these works of the nineteenth century fin-de-siècle reflect Burne-Jones concerns about the social ills of Victorian society. They come from a time of strikes, riots, of desperation, outrage and fear, which prompted movements toward political and social reform. The paintings look back to a better time before urban squalor and exploitation.

The Nativity and The King and the Shepherd hung on the north and south walls of St John’s for just over a hundred years. During the 1980s the church developed problems with its roof and to pay for a new one it sold the two paintings in 1989. These were its most valuable treasures and copies were hung in their places. 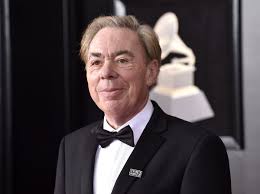 The Nativity and The King and the Shepherd were acquired for £1.5 million by composer Andrew Lloyd Webber for his collection of Victorian paintings. Lloyd Weber could well afford to purchase such works of art having benefited from his string of hit musicals beginning with ‘Jesus Christ Superstar’.

In 1996 art experts visiting Lloyd Webber and advised him that his collection would suffer permanent damage if exposed to light – many had been hung near windows.

In October 1996 the composer was in Pittsburgh to receive an award from the Civic Light Opera – the city had been the site of the 1971 world premiere of ‘Jesus Christ Superstar’. Remembering the town with fondness, he offered the two paintings to the Carnegie Museum of Art.

And that’s how The Nativity and The King and the Shepherd ended up in Pennsylvania.