Torquay’s many ghosts and paranormal happenings have evolved along with our town. They tend to appear as we expect them to and change as we change.

As a town, Torquay really began in the early nineteenth century. The small rural communities that came together did have a range of supernatural beliefs. This was despite Anglican clergy dismissing the paranormal as being merely superstitions associated with the Catholic faith. Yet, Torquay’s growing century non-conformist churches were more open to the notion – John Wesley and his Methodist followers fully believed in apparitions.

In a rural society where few people had the ability to read, ghosts acted as a useful way of remembering notable events. Such storytelling, on the other hand, also distorted and misremembered. 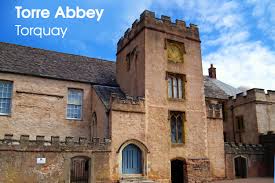 In 1588 Torre Abbey‘s Spanish Barn acquired its name after 397 Spanish sailors were imprisoned there. The prisoners were quickly sent out of the Bay, but myths about their stay emerged as memory of the event faded. One story tells that in Upton “the blood of the Spaniards ran like water… the spirits of the slaughtered Spaniards visit the spot”. Yet, while the Barn was certainly overcrowded, and around 15 Spaniards perished, the prisoners were too valuable not to be ransomed.

The first telling of the best known of the Abbey legends is that of the Spanish Lady. We read of the love that led her “to don male attire in order to join the armada, shrouded in a gracefully flowing mantilla, she may also at times be seen.” By the twentieth century these few lines had become melodrama: “The poor little flower of southern Spain quickly faded in this dreadful place. Her troubled spirit is still to be seen drifting slowly and rather wearily through the Abbey park”.

We’re not alone in having such a restless sprit. The White Lady archetype of a wronged woman occurs around the world and in many cultures – the Japanese Ringu is one example of many. 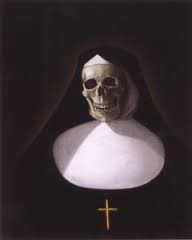 Eighteenth century ghosts returned to correct injustice and to give moral instruction. So we have the ‘Shrieking Nun’s ghost of IlshamGrange’, who had starved in a locked chest – when properly buried, our noisy nun disappears. This story may not be as old or genuine as it first appears – there is a similar legend, the Mistletoe Bough, which first appeared in the form of a poem in 1823.

A further Gothic morality lesson concerns Matilda whose spectre roams Daddyhole Plain. In a fit of jealous anger she was said to have sold her soul – Daddy being another name for the Devil. Again, the popular 1796 novel ‘The Monk: A Romance’ also has a Matilda who similarly gives up her soul.

Some supernatural entities had very practical reasons for becoming part of local folk culture. They warned the unwary and children away from dangerous places: Kent’s Cavern had its malicious pixies; while the execution site for thousands at Gallows Gate was beyond the community, the refuge of exiles, and so the haunt of human undesirables. Another theory is that ghost stories were spread to keep people indoors at night while smugglers carried out their illicit business – note the legend of the dangerous Springheeled Jack roaming the haunted lanes of Maidencombe and the headless horseman of Avenue Road. 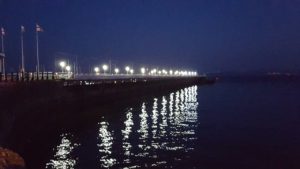 Ghosts are entertaining and exciting, so we may have to look to our Victorian tourist guides who were known to invent or import exciting stories to enhance their income. Are ghost stories still being introduced into the Bay – have our new communities already brought their folk-tales from the towns and villages of Poland?

Perhaps some old buildings aren’t seen as complete until they acquire a restless spirit, which can often lead to vague and half-hearted hauntings. We have the very helpful hermit’s ghost of the medieval St Michael’s Chapel near Torre Station and Barton Hall’s ‘White Ghost’, the spirit of a woman murdered by her husband.

Even in a modern literate society, urban folklore can develop around a story that polite society would feel beneath its dignity to put in print. Hence, we have Lilly Langtree haunting a house in Lower Warberry Road, the site of her supposed affair with Edward VII. Notably, the usual rules of supernatural infestation seem to have been broken – for from being hopelessly in love with her royal paramour, Lilly also had dalliances with a range of other men, died in Monaco and was buried in Jersey. 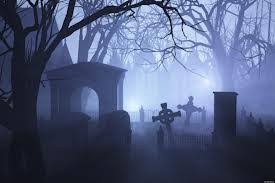 The Gothic literature of the early nineteenth century gave way to more complex tales, affluent Torquay embracing the occult and mysterious. The greatest influence came from Charles Dickens, who visited Torquay in 1862. Though Dickens didn’t believe in apparitions, he found them a useful plot device and further popularised the ghost story. Other great storytellers of the uncanny had a real knowledge of the Bay– both Wilkie Collins and Henry James set stories in Torquay, respectively ‘The Woman in White’ (1859) and ‘The Figure in the Carpet’ (1896).

There was one Torquay tradition that was formed around a belief in the supernatural. This was Spiritualism which held that the spirits of the dead could be contacted by mediums. It quickly became a blend of parlour game, entertainment and new religion.

Many prominent Torquay spiritualists were middle and upper class women – Harbourside resident Elizabeth Barrett Browning being one devotee. The Bay’s Victorian ghost then became middle class, familiar and friendly, and able to be contacted in séances across town. Notably, many spiritualists supported progressive causes such as women’s suffrage and Irish Home Rule – while the spirits they contacted were known to advocate similar campaigns.

Violent times can arouse vicious ghosts and it was during the Great War that Torquay embraced the aggressive poltergeist. In 1917 the Spiritualist Violet Tweedale investigated the Warberries’ ‘Castel-a-Mare’, which had reputedly been haunted for fifty years. One of Violet’s investigators was quickly possessed and had to be exorcised. A few years later, the writer Beverley Nichols also visited – something “black, silent and man-shaped rushed from the room and knocked him to the floor.” 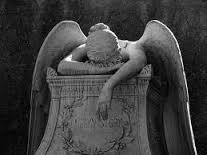 The main question is, of course, do ghosts actually exist? The first national organisation to conduct scholarly research was the Society of Psychical Research founded in 1882. Since then, despite thousands of studies, no credible scientific evidence for ghosts has been found. Most investigators have concluded that apparitions are caused by a range of non-supernatural phenomenon.

To take one example, it’s been suggested that the ghostly organ recitals of St John’s Church in Montpellier Road were the consequence of wind blowing through the pipes – the later sightings of the opaque organist being due to ‘pareidolia’, our tendency to interpret patterns in random perceptions. 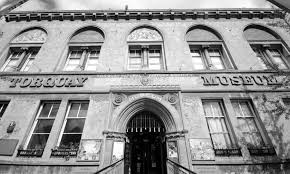 We’re not done with ghosts – people still report things that they can’t understand. The now closed Clipper Inn in Melville Hill, for example, retains the manifestation of a deceased gentleman who is to be glimpsed smoking his pipe in the bar. And we have newly discovered spirits such as those glimpsed at the museum while our traditional ghosts have now been joined by other manifestations of the paranormal – such as the Chrystal Skull.

So Torquay’s ghosts are still here, have many reasons to remain, and will certainly go on evolving as our town grows and changes.