The fiction writer Elizabeth Goudge (1900-1984) lived in Marldon for 12 years and played an important role in the creation of the mystique of Torbay. 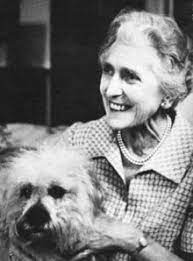 After her father’s death in 1939, Elizabeth and her mother moved into a bungalow in the village, only planning a short vacation. However, the outbreak of war caused them to remain. A local contractor built them a bungalow in Westerland Lane, now Providence Cottage.

While a resident, Elizabeth wrote several books with Marldon as a setting and included references to Berry Pomeroy Castle, the village of ‘Smokey’, and the fields of Cockington. These are Smoky House (1940), The Castle on the Hill (1941), Green Dolphin Country (1944), and The Little White Horse (1946). But the book that interests us here is Gentian Hill (1949), specifically its retelling of the St Michael’s Chapel legend, and the way that the book has been accepted by some readers as history. 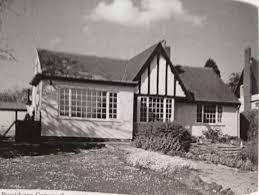 The first of Elizabeth’s assertions is the name. She writes, “The village… is now called Marldon, derived from Mergheldon, the hill where the gentians grow, and as I have been taking liberties with it, I have called it Gentian Hill.”

That Marldon means ‘the hill where the gentians grow’ has often been taken as fact. There, however, other possibilities. The village wasn’t recorded in Domesday, but we do have a ‘Mergheldon’ or ‘Merledone’ in 1307; and ‘Mareldon’ in 1524. 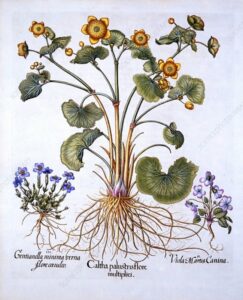 A gentian is a herb often used in medicine and the origin seems to be the marsh marigold, Caltha Palustris, possibly alluding to its past medical uses and its association with medieval church festivals. It is one of the ‘golden flowers’ dedicated to the Virgin Mary; and so we have ‘Mary’s Gold’. This, however, is just supposition. This sacred interpretation of Marldon would certainly have appealed to Elizabeth’s Christian outlook; more attractive that the other, more pedestrian, ‘hill of marl’, the soft sedimentary rock used for many centuries as fertilizer.

Gentian Hill is set at the time of Napoleonic Wars where young Midshipman Anthony O’Connell, deserts his ship at Torquay and escapes into the countryside where he meets and falls in love with Stella Sprigg, the adopted daughter of local farmers.

Elizabeth intertwines the Anthony and Stella story with the legend of St. Michael’s Chapel as she explains in her introduction, “This story is a retelling of the legend of St. Michael’s Chapel at Torquay… it’s elaboration is my own invention, though the story has come to me so vividly from this bit of country that I have hard work to believe it is not true.”

So, is the St Michael’s legend true?

The nineteenth century story is of a shipwrecked sailor rescued by the canons of the Abbey. In gratitude, he builds a chapel on the hill where he could see the place where his ship went down. There he lived the rest of his life as a hermit and could be heard praying for the safety of those at sea. Three hundred years after the hermit’s death, his ghost helps a young woman rescue her shipwrecked lover as he returns from his travels.

There doesn’t seem, however, to be any record of the story or the ghost before 1850 when the anonymous ‘Legends of Torquay’ was published. It is later repeated in Arthur Charles Ellis’ ‘Historical Survey of Torquay’ in 1930 and this is where Elizabeth is likely to have come across the tale. 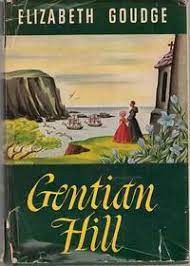 And it may be significant that the faithful young woman in the story is called Rosalind, the same as the beautiful protagonist of Shakespeare’s play ‘As You like It’ (1600). In both narratives she exemplifies the best of the virtues to be found in a Renaissance English woman.

Another way to tell if a folk story is of a real event, rather than a work of entertaining fiction, is the amount of detail and dialogue presented. For example, in the Chapel ghost story the long-dead hermit delivers a very lengthy address, “Tell him, my child, that even he who scoffed at it erewhile, has cause for thankfulness for my pious work. Not always am I permitted to visit earth, in my earthly form, but for some good end or wise design. But, maiden, hear my latest words. When any shall seek the grey chapel yonder, with reverence and worship in their hearts, to muse on good times gone by, the spirit such meditations invoke shall leave within each breast some lasting good. When any shall seek it in sorrow and distress the same spirit shall soothe and comfort their hearts. When any shall come to bewail some bygone sin and drop the penitential tear upon the rugged floor, not idle will that spirit be to teach their hearts aright and lead to hope and life. Farewell. Remember me.” 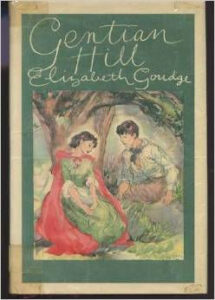 Who wrote down this wordy missive is unclear, but does point to the Victorian Gothic milieu, an anonymous melodramatic and sensational romance for the consumption of the masses.

This no doubt appealed to Elizabeth’s Christian worldview of sacrifice, self-discipline, healing, and growth through suffering. She took myths and legends and transformed them into guides to find, as she put it, the “eternal, immortal, invisible, the only wise God”.

At the conclusion of the story within a story of Gentian Hill, the St Michael’s Chapel guardian then takes on another role: “And always the Holy hermit prays like Moses upon the hill top or high in the watch tower.”

That was Elizabeth’s gift, to take the supposedly ancient and turn it into a lesson on how to live. She wrote: “As this world becomes increasingly ugly, callous and materialistic it needs to be reminded that the old fairy stories are rooted in truth, that imagination is of value, that happy endings do, in fact, occur, and that the blue spring mist that makes an ugly street look beautiful is just as real a thing as the street itself.” 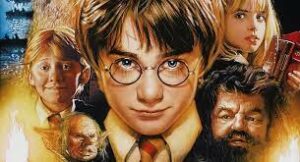 Now largely forgotten, Elizabeth Goudge has, nevertheless, left her mark on popular culture. JK Rowling identified the Marldon-set ‘The Little White Horse’ as one of her favourite books and one of few with a direct influence on the Harry Potter series.