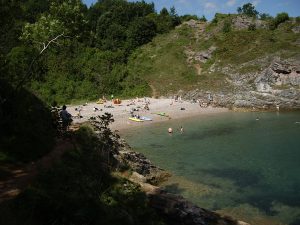 Sasquatch or Bigfoot is the ape-like creature that supposedly inhabits the forests of the Pacific Northwest. Scientists generally discount its existence and consider it to be a combination of folklore, misidentification, and hoax rather than a real living animal. 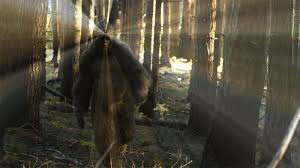 It is vaguely possible, however, that something might be wandering around the vast wilderness of the United States and Canada. Less feasible is that a similar beast is to be found in Churston Woods. Yet, in 2006 sightings of a woodland animal lasted for around six weeks. Fifteen witnesses eventually came forward to describe an ape-like creature, around five foot tall, with brown hair covering its’ body and with a green face. These observers further stated that the hominid didn’t have a tail. On two occasions the being was seen swinging from tree branches “with tremendous agility”.

While this caused passing interest at the time, since then websites such as the ‘1996 Humanoid Reports’ and ‘Bigfoot Encounters’ have continued to promote the incidents as part of a worldwide phenomenon of secretive simians. Incidentally, the Big Foots illustrated above and below are Americans in furry suits and not to be confused with the real Churston Sasquatch.

Such reports naturally excited those fascinated by tales of unlikely beasts roaming the fields and alleyways of our green and pleasant land. The Director of North Devon’s Centre for Fortean Zoology Jon Downes, for example, commented, “I have many similar reports of such creatures being seen in Devonshire woodland. And this one is a real cracker because it has so much separate and credible corroboration to it”. 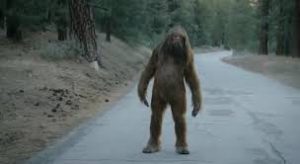 Jon continues, “To me at least, this sounds like some form of primitive human, but, of course, such things simply cannot exist in this country – and yet they seem to. And this area – Devon, Somerset and Cornwall – is rich with such tales.”

It’s probably worth pointing out at this stage that we’re now into the realms of cryptozoology which aims to prove the existence of entities from folklore and undetected animals otherwise considered extinct. Because it doesn’t follow the scientific method, cryptozoology is considered a pseudoscience by those old fuddy-duddies in the academic world.

Enter the fine folk from the British Centre for Bigfoot Research, “a project founded in order to bring together people in the UK and other countries alike who have an interest in the phenomena of large hairy bipedal apes stalking the remote forests of the world.” Their website reports that, “It was the summer of 1996 when people in the Torbay village of Churston, Devon started to report seeing a Bigfoot-like beast in the dense, creepy woodland.”

The Centre have done a bit of thinking about this. “Because of the size of the Bigfoot (five foot tall) some have speculated that this was an infant Sasquatch. But as we have found during our research, a lot of sightings of British Bigfoot show that the animal isn’t as big as its US cousin. Could the British Bigfoot in fact be relict populations of ancient Homo species, such as Neanderthals, Homo Erectus or Homo Heidelbergensis? Erectus were around five foot tall and in our opinion, may have a direct descendant of the Sasquatch. Is it unfeasible to think that relict groups of a Homo species could still be surviving in densely forested and remote areas of Britain?” 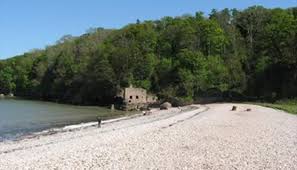 Although it’s is arguable whether Churston’s “creepy woodland” is “densely forested and remote” this didn’t prevent the Centre’s members undergoing some field research. “Last year we visited Churston to see if anything could be forth-coming. Our search in the area brought up nothing of interest unfortunately. We found no evidence of tree structures, branch snapping or footprint evidence.“ 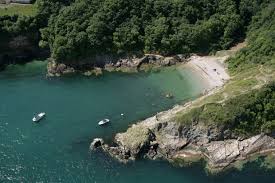 Perhaps our intrepid investigators would have had more luck if they had visited Paignton Zoo, four miles away and uncontroversially inhabited by four foot tall apes. Oddly none of the reports and descriptions on the internet mentions the Zoo’s close proximity.

Alternatively, we may be looking not at a juvenile Sasquatch, but another hirsute species altogether. According to yet another US website, “We’ve all heard about the antics of Bigfoot, but what about Littlefoot? Certainly, it’s an undeniable fact that many reports emanating from Britain tell of encounters with not just large and lumbering, hairy entities, but with distinctly smaller critters, too.”

While no more sightings of the ‘Bigfoot’ seem to have been reported since 2006 – unless someone knows better – there was another encounter later in that year which has been endlessly repeated on the internet.

“A friend of the group had an unnerving experience in the summer of 2006. He and two friends decided to spend the night at the nearby Seven Quarry. After pitching the tent in the first quarry everyone felt great, but as nightfall approached they started feeling edgy and nervous despite making double-sure that nobody else was there. It was a one-way-in, one-way-out location, and impossible to navigate safely in the dark. They were alone. However, after a couple of hours into the night the group were getting quite worried and heard heavy footsteps on the gravel around the tent that was shortly followed by heavy breathing. Then something kicked the ground-sheet of the tent inwards towards them where it stayed until they pushed it back out, something that they couldn’t recreate in the morning without first moving the fly-sheet out of the way beforehand. They spent the remainder of the night in the tent not daring to leave until the sun was back up and the atmosphere returned to normal.” 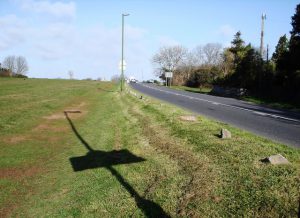 The Centre for Bigfoot Research folk found this particularly notable.”This is very interesting as this sort of activity has been reported by many campers in the USA, in areas where Sasquatch have been reported. Is this the same sort of behaviour? These are questions that still need answering. We hope to make more progress in our research into the Churston sightings and will bring more info as it comes.” Sadly we’re still waiting for an update.

Not that we’re not being sceptical here, but it’s worth pointing out that the influential movie The Blair Witch Project came out in 1999. The film tells the fictional story of three student filmmakers who hike in the Black Hills in Maryland to film a documentary about a local legend known as the Blair Witch. The three disappear, but footage they shot is discovered a year later. This “recovered footage” consists of people progressively panicking as they become lost in the woods and being harassed by unseen forces at their campsite:

So that’s the story of the Churston Sasquatch. Next week we’ll be taking a closer look at the Ellacombe Tyrannosaurus rex which has been witnessed by several regulars as they leave the Old Skools Cafe Bar in Market Street.