An artist is turning a rhino into a dinosaur for a free public art trail around South Devon.

London-based New Zealand artist Mandii Pope made headlines in 2013 when she transformed a life-size gorilla into Darth Vader. Now, she’s turning a rhino into a triceratops for Paignton Zoo, The Great Big Rhino Project and sponsors Cavanna Homes.

But how exactly do you reverse 68 million years of evolution for the sake of art? With chicken wire, paper plates, children’s toys and other found objects, apparently… Mandii explained how she created the beast.

“His head is chicken wire and fibreglass, with a children’s bow and arrow to build up the shape! His cheeks are paper plates. Then there’s a covering of 6mm foam carpet lining, then more fibreglass. The ridges in his head are children’s foam swords. The head is filled with expanding foam for strength. I’ve used latex to cover the head and filled the horns with car body filler and foam. His front horns are wooden bracelet holders covered in car body filler. His beak is latex filled with expanding foam. Then everything is covered in yet more fibreglass!” 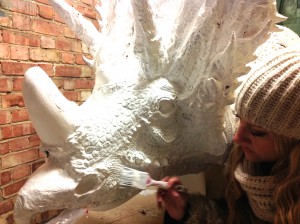 The artist, who has had to deal with distractions including a collapsed roof in her home, went on: “Building him was the time-consuming part. I can paint quite quickly after that. I just need to finish the scales on his body, build his feet and add a tail… He will be airbrushed in the Cavanna Homes colours of teal and blue – he will look stunning!”

The Great Big Rhino Project will put a free trail of life-size painted rhinos around the streets and public spaces of Exeter and the English Riviera, encouraging thousands of people to enjoy the spectacle this summer.

Mandii is not an artist who does things by half: she plans to open a Twitter account for her rhino so he can talk to the others. “I’m also making a Jurassic World-style video trailer!” What’s more, she is already planning what to wear at the grand charity auction on 3rd November – “A teal-coloured dress with a huge train and Triceratops collar!”

Cavanna Homes Managing Director Eugene Rapson said: “Cavanna Homes has been serving the people of Torbay and the South West since 1923, as has Paignton Zoo. The Great Big Rhino Project is a great way for us to work together to raise money for an amazing cause.

“Three years ago we started working together with Mandii on the Great Gorilla Project. One of the gorillas, who we call Gumball, has pride of place at our Fusion development of 220 new homes in Paignton. Now we can’t wait to see the finished rhino-turned-dinosaur in all its glory on the streets of Devon.”

The Great Big Rhinos will come alive on Saturday 30th July. Money raised by Paignton Zoo’s Great Big Rhino Project will be channelled through Save the Rhino International. Rhinos have been around for 40 million years. There are five species: black, white, greater one-horned, Javan and Sumatran. All of these are threatened with extinction – three are Critically Endangered as defined by the IUCN (World Conservation Union). This means that they will not survive without massive and urgent action.