Cody is known locally as the 3 year old Facebook chef. This is pretty much who he is. We are a father and son duo who couldn’t cook but now promote family cooking time and healthy eating for children.

Back in June 2018 we had a family hiccup. I quit work to become a full time parent to my then, 2 year old son and 4 month old daughter full time. Nobody planned for the huge loss of income so, therefore no savings were in the pot. After selling everything possible which was worth anything, we resorted to the local food bank back in Birmingham. I am not a cook by any means. I can cook a pizza and chips in the oven or a jar and mince for spag-bol but that is as far as it goes. So, to be unloading a random selection of tin cans from the food bank was a really big wake up call, I needed to learn how to cook and fast. 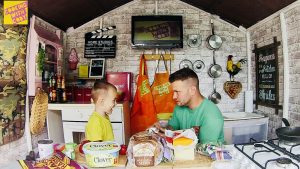 I video called my mum to show her what we had got. We had bags and bags of food but no idea what to do. My mum found it rather amusing that Cody, who was rolling tins around, had more of an idea than me.

I pulled up a chair and tipped a tin of chick peas into a bowl, gave him a spoon and that was the start of that.

Throughout that summer we made a video a week cooking different things, researching online of different things to cook. It really gave me something to do as our broken family was going through such a hard time. I come from a retail management background so I tend to be very active with projects and cant just sit at home doing nothing. Editing videos and sharing them online was my way of not falling into a trap of depression. 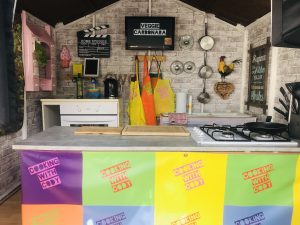 Later on last year, in November, the children and I fled from Birmingham to Devon and stopped the videos as we were in a homeless shelter in Torquay. After 6 weeks we moved into a private rented place a week before Christmas. I slipped into depression as I had nothing to get my mind into and it was the hardest time of my life.

We had a shed in the garden which I started to paint inside and turn into a little cooking station for Cody to mess about in. I found a gas hob and oven free on Facebook and also I drove past a house with a worktop outside. I knocked the door and they said we could have it. A couple of months on and we had a full functioning studio kitchen.

When we were able to film again we started to cook requests from our followers on Facebook and we were cooking LIVE shows every Sunday on Facebook. We did it live to save memory on my phone because that’s how I used to film and edit everything. A friend in Devon gave us a camera and we purchased some editing software for my £30 laptop. Which I am still using now.

We started making good videos, LIVE for complete humour reasons and also filmed so we can edit them and make it a shorter video. We were then told to stop again by the family courts. A few months went by over the summer and then we had the all clear to carry on.

We are now producing videos to promote healthy eating with children and family time cooking together. Cooking gives children a huge bunch of benefits like fine motor skills, time keeping, maths, ingredient choices the list is endless. We are really pushing for children to make better eating choices and to eat more fruit and vegetables.

I don’t have to go back to work until my little girl is 3, so I have 18 months to work with my son to help as many families as we can to eat better and to want to make heather choices.

Good food is cheap, tasty and can be made to look amazing too.

I got asked if I would donate my organs to my kids if they needed them. I said yes of course. Then they asked, “what if your organs weren’t healthy enough to save your child’s life”

It’s time to eat better, guys. One child’s belly at a time.

You can find cooking with Cody here.