After the awful events in Plymouth this week where 5 people were murdered before the offender turned the gun on himself, the community of Plymouth will be a shock, as will all the emergency services who were directly involved. This goes for those who attended the traumatic scene but just as much so, for the control room operators in the Police and Ambulance control rooms. The family, friends and neighbours will of course never get over it, but I get the feeling they are a strong community who will have an eye out for each other. I do hope so.

I thought it would be helpful to give a flavour of what happens when police are called to violent incidents which may involve knives or firearms. I was in the firearms unit for over 20 years and worked in the Plymouth area for some of that time although it was always on my patch. I experienced the professionalism, courage and comradery of those officers. I include response officers, the control room staff, NPAS helicopter crews and paramedics. I won’t be commenting on this specific incident so I have given a generic example where similar events have happened many times in my career.

We start with what happens when a call is received by the ARV.

“Yankee 28, can you start making your way, there are reports of a stabbing involving a machete with a least one casualty involved. You are authorised in a firearms capacity and we are informing other ARV’s to start making their way.”

This type of police control room radio message is familiar to any armed response officer whilst carrying out their daily patrols. In Devon and Cornwall where I policed as an ARV sergeant on the armed response vehicles, the ARV’s are dual-rolled in roads policing so are specialists in attending the scenes, and scene managing serious and fatal road traffic collisions, but they could have just as easily have been attending a domestic incident in the capacity of a response officer just prior to the call.

Yankee 28 is crewed with two highly trained firearms officers and they get on well together. The driver is Jim, and his crew mate, Dave. Jim taps the buttons for the blue lights and sirens on the Police BMW X5 steering wheel and begins to make progress through the traffic to get to the scene as soon as possible.

They’ll be weighing up the time expected to get there and seeing which other units are attending, for example whether an ARV will get there first? They know a response officer’s (panda driver) task will be to prevent members of the public from walking into harm’s way and will try to coax people to safety if they possibly can, but they won’t be expected to walk directly into the danger themselves. Anything they do has to be considered to be achievable. The ARV officers know the priority is to get the armed officers there as soon as possible.

Jim and Dave know the ambulance will already have been sent but they will probably need to stand off until ARV’s have arrived, and their Hazardous Area Response Teams (HART) will have been deployed to the scene too. These are paramedics who have been trained to enter hazardous areas such as heights or even underground, and includes working with police firearms officers. They have body armour and know their role alongside the police to get urgent medical assistance to those in desperate need whilst being escorted by armed officers.

Jim and Dave in Yankee 28 are aware the control room inspector (Force duty officer) will be pulling a team together on the radio and coming up with an initial plan given the information coming in from eyewitnesses and the research being done on the police databases. An Operation Firearms Commander (Team leader) will have been nominated and will be rushing to the scene to organise the arriving units. They’ve done extra courses and have the knowledge and ability to put a tactical plan into operation. Dave and Jim are now thinking about the scene itself. Was the call anonymous? It may be a hoax call so maybe stood down any moment, but time is ticking on and it looks as though there is some veracity to this as not only has the informant given their name, more calls are coming in. Jim negotiates a stubborn driver in front who fails to pull over to let him pass, but Jim’s more interested in planning with Dave what they are going to do if they are first on the scene. Both officers are listening intently to their earpieces to hear the latest information and progress of other units.

Dave is reminding himself of where the first aid kit is in the car. The same place it always is so they can grab it quickly at road traffic collisions or any other violent incident where injuries are expected. It contains a comprehensive list of equipment. More than the average first aid kit and includes oxygen and airway tubes along with blood clotting agents and lots of bandages. Lots and lots of bandages.

Dave relays to Jim, “At least one casualty, and we don’t know if the suspect is still in the house or has left the scene.

“Right” confirms Dave who is now travelling at 130mph along the motorway concentrating on the cars in the middle lane flicking by at half their speed. His brow is strained as he juggles the aspects of police driving and what he may be heading into. ARV officers do a lot of training. The initial basic course is 13 weeks long, and then there’s the refresher training which is 4 days every 6 weeks. It’s relentless, but it means they are competent and confident in what they do and they know their colleagues are the same. The training is the same given nationally, so one team can mix with another Force’s team and they would very soon blend as one. Trained in vehicle interceptions, building entries and open ground searches, they are a formidable team, and yet they can be used for all sorts of other incidents as simple as helping to find a missing elderly person.

Jim and Dave listen intently to the local officers reaching the scene on the police radio. Their satnav tells them they are just 2 minutes away but there’s another ARV car arriving within 8 minutes so it’s probably going to be down to themselves.

“Pappa 32” the local unit speaks with a strained tone, “There’s a smashed window on the front of the house, we are going forward to take a look. There’s a lot of shouting. What’s the ARV’s eta please?”

“Pappa 32 from victor, your first ARV will be arriving in a couple of minutes. You may want to wait for them.”

Dave and Jim listen intently as the BMW X5 slews around a right-hand bend into a residential street, the engine growls and the revs scream out as Jim calmly controls the power and steering, giving the impression the car is merely being driven on patrol. They are travelling up to 70mph through the streets as there’s a sense of urgency for any victims and their unarmed colleagues already at the scene. Jim’s eyes are darting from the pavement, expertly adjusting his direction and speed according to what is happening in front of him. The last thing he could afford is to be involved in a collision now.

The voice on the radio is pitched, with a hint of a nervous tremor, “Pappa 32, we have a badly injured person in the house. I’m being told the offender has made off into the town with a large knife. He stabbed the female here who has life-threatening injuries. The ambulance is here and treating her, but she is able to tell us he’s looking for her boyfriend she’s been having an affair with. I’m trying to obtain further details. Standby”.

Dave shouts up, “Victor, Yankee 28, we are going to head into town and come back towards the house as that will probably be the safest method to pick him up. Can you confirm with the duty officer?”

The duty officer in the control room takes over the radio. “Yankee 28 from one zero, yes I’d agree with that. We believe the male intends to locate the boyfriend in town who works at the Great Oak Inn in the high Street. We are phoning them now to advise they lock down the premises and I will be sending the other ARV to the house for them to follow his expected route. Between you, you should hopefully come across him. I am authorising a foot strike but consider an emergency search on the pub if we believe he has got into the pub before you arrive as there is an immediate concern for further loss of life.”

“Received” is the curt reply from Dave who adjusts his position in his seat in anticipation. He knows he’ll probably only have one chance. He understands there isn’t going to be time to access the gun safe in the car at the back to get his G36 semi-automatic rifle or AEP (Baton Gun) so he will have to rely on his Glock pistol and taser he has with him. Dave discusses the tactics with Jim as they don’t want any surprises but they get interrupted by the sight of the suspect walking towards them. They are going to have to rely on their training, and Jim, very quickly accelerates the patrol car towards the man who immediately stops in his tracks.

Dave has his left hand on the door handle and is holding his Glock in his lap. “I’m Glock, Jim, you cover with Taser if he’s not carrying.”

“Yes, mate” snaps Jim as the car eats up the distance between them and the suspect. Jim swings the car sharply to the right, over the kerb and onto the pavement presenting the front passenger side to the suspect. Dave is already out and screaming at the man, thrusting the pistol directly towards the man’s head.

Dave glances to his right and sees Jim with a taser. The man is prostrate on the ground having thrown the machete along the pavement away from him. His arms are outstretched.

“Cover me,” Dave says to Jim who remains with the taser red dot on the man’s back. Dave pushes his Glock back into it’s holster and pulls out his cuffs. The incident is over. No one has had the opportunity to film them so it shouldn’t be on social media or in the press, but it’s all caught on their body-worn camera for them to analyse later.

Just time to book him in and write up the job before the next shift comes in. A good day. 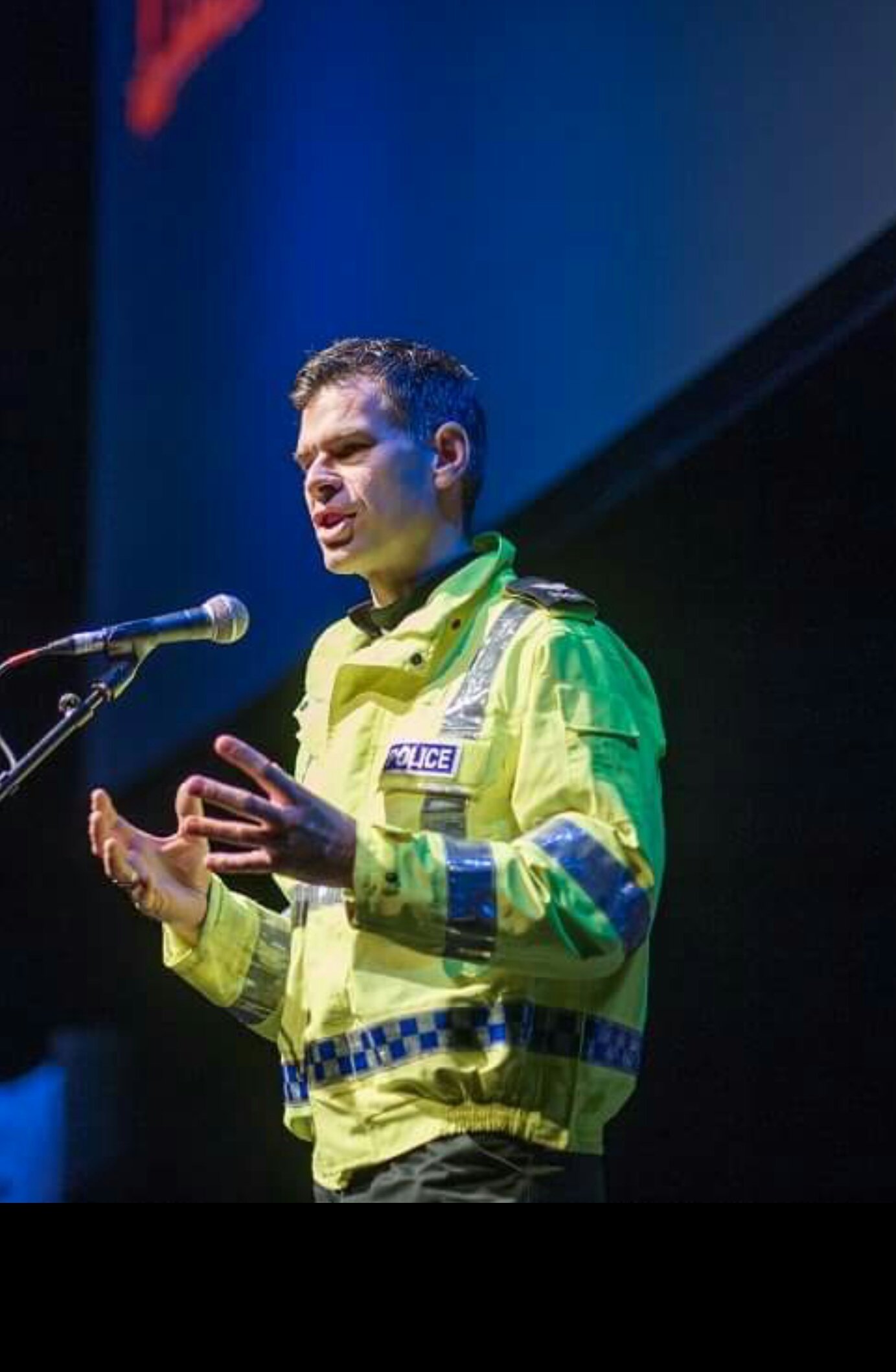 Harry Tangye served with Devon & Cornwall Police as their firearms and traffic sergeant. He was a serving officer until he retired last year. He is now a writer, speaker and police consultant.

Police have appealed to the public to help idenfity three men who they'd like to speak to in connection with incidents during the Vanarama National League Play-off Final earlier this year. The Torqua…

There is still a national driver shortage and Torbay Council and SWISCo are working hard to recruit more drivers and increase capacity locally. This week, one driver resigned and another driver has h…