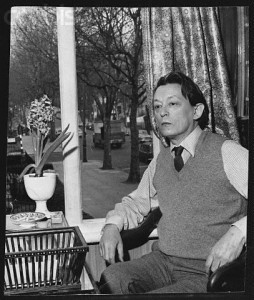 Back in July of 1947 the Spectator Magazine’s James Pope Hennessy spent three days in Torquay… and he didn’t like it:

“Torquay is all scarred and pitted by progress. The sea-front and the gentle hills are a litter of red-tiled houses, protuberant bungalows, chain-terraces and lodging-houses with names worn like a crown in giant letters along their tops. Here and there amongst this jumble sit the pretty, old, chalet-like villas, prim yet frivolous, elegant but not to be taken seriously. These houses, and the long low mansions in Lime Avenue and Chestnut Avenue by Tor Abbey, might be compared to the traces of mediaeval London still to be seen in the modern city. They mark the ground-plan of another age.

“It may have been because I had something to do at Torquay that I felt priggishly that nobody else had anything to do at all. I mean that they did not seem to be fulfilling the purpose for which they had presumably come to Torquay – to enjoy themselves.

“The whole town was swarming with holiday-makers, only they did not seem to be making holiday. One doesn’t, of course, expect any overt gaiety from English people at play. I did not anticipate that vivacity, that careless, wayward charm which makes even the shoddiest French seaside resort so stimulating. But all the same there was something unduly oppressive in the empty, questing faces of the crowds that shuffled and shambled through the sunless, hot but steep and windy streets. They had nothing to do, it seemed, because there was nothing for them to do.

“An occasional band; a long, long ribbon of deck chairs stretched out on a cement sea-front (there is little sand at Torquay), a squalid underground swimming pool with gaps in the ceiling, a great vita-glass mausoleum to enter which you had to pay – this seemed all Torquay could offer. The basic idea there was evidently to force as many people as possible to look out to sea for as long as possible at the same time. Every-thing fronted seawards.

“Public-houses, hot, stale and smoky, were pathetically crammed. They might, though, have been in the Grays Inn Road; one thought of the cafés and awnings of a French sea-front, Royan for instance. In the country round the town it was the same story. Cockington Court, now acquired by the municipality, is well kept up, and the thatched village at its gates remains resolutely picturesque. Through the village street drifted an aimless horde of people deposited by motor-coaches; peering into the smithy, questioning the villagers. But nowhere did people seem to be really happy or really carefree.

“Inside the big expensive hotels, the atmosphere was the same if the quality of enjoyment offered was not. It was only dreariness with a difference. In these hotels, for a large all-in fee, the richer members of the public can eat pretentious and costly meals while a violin squeals from a musicians’ gallery in the wall.

“Over-dressed women gyrated slowly with partners in dinner jackets round the dance-floor; expressionless, almost sombre. Other guests sat side by side near the great verandah windows, looking once more out to sea.

“Mealtimes were marked by family processions which made one gratefully remember Thurber: daughters following their mothers, sons trailing at a father’s heels. There was no merry hum of conversation through the dining-room. Strands of laughter floated over from a single distant table, where an enchanting and vivacious old French lady was entertaining a couple of old Americans with stories of daily life in the hotel.

“Had the Victorians some gusto we have lost, I wondered as I manipulated a hunk of cod upon my plate in the dining-car, on the way home. Are English people too exhausted to enjoy themselves? Or have they just forgotten how?”