Paignton Zoo is sending rhinos to all corners of the UK. The full-size sculptures are part of The Great Big Rhino Project and are on their way to artists across the country thanks to Torbay Clearance Services.

The company is delivering rhinos to expectant artists in the North West of England, London and the South East. Company director Andrew Rogers said: “The first rhino arrived in Southport at 7.00 o’clock on a dark Tuesday evening after a journey of around 280 miles. The artist had a little bit of a problem getting it into his two-up, two-down house! Then, on the Wednesday, the team came back down south, dropping off one in Liverpool and another in Birmingham as planned.”

Fellow director Simon Crawshay added “After attending the launch of the Great Big Rhino Project and realising how close we are to losing an entire species, we were delighted to offer our experience and vehicles to support this amazing cause. Our team all volunteered to assist. We are proud to support Paignton Zoo and its conservation work in our own small way.”

A fourth rhino was delivered to Cullompton, near Exeter, after spending the night lit up in the company’s shop window in Preston, causing something of a stir in the process. Another trip of 350 miles to Norwich and London is planned. Each Great Big Rhino weighs around 40 kilos and measures 134cm high by 225cm long and 80cm wide.

Torbay Clearance Services carries out comprehensive, discreet and professional property clearance work, often in partnership with solicitors and estate agents. Members of the Zoo’s SOS corporate supporters club, they have the vehicles and staff to handle anything – even rhinos! 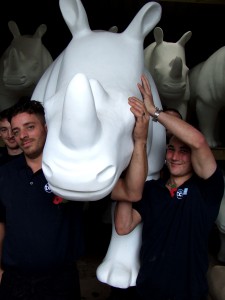 The Great Big Rhino Project will provide a trail of colourful rhino figures around the streets, parks and open spaces of Exeter and the English Riviera, encouraging thousands of people to enjoy the spectacle. It all starts on Saturday 30th July 2016.

Paignton Zoo, with main event partner Wild in Art, is raising funds to help Javan and Sumatran rhinos; the money raised will be channelled through Save the Rhino International. Twitter @Greatbigrhinos, hashtag #greatbigrhinos.