How things could have been so different! Torbay was on the way to becoming the British Hollywood. Today we could be a northern European Cannes. We had the exotic-looking locations and the natural light – crucial for outside filming in the early twentieth century. 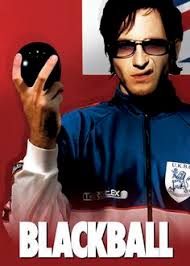 Raleigh-King Productions was based at Watcombe Hall. It was established for actor, director and producer Dallas Cairns who was already making films at Ealing. Two films were made in 1922, ‘Creation’ and ‘The Island of Romance’. However, it appears as if no prints have survived. Based in a drill hall in Paignton, ‘Torquay and Paignton Photoplay Productions’ produced ‘The Great London Mystery’ (1920), a 12-episode serial starring stage conjurer Davis Devant.

One of the first Bay productions was the 90-minute film ‘Nelson’, filmed in the second half of 1918. It has a wartime propaganda theme and begins with views of British warships. The captions inform us that British sailors “are the best and always have been”.

In the 1919 movie ‘The Rocks of Valpre’, the ‘Magic Cave’ on the ‘rocky coast’ of France is Corbyn Head. The storyline has a young English woman injuring her ankle and being rescued by a Frenchman. He invites her back to his cave to see a ‘magic secret’ (careful now). This turns out to be a new gun he is inventing. Rumours spread and the gun inventor finds himself challenged to a duel. This duel is fought on Corbyn Head just behind today’s public toilets. As the men fence, the heroine stares towards the Marine Spa (now Living Coasts), and the movie ends with a romantic scene on Rock Walk where the couple promise to love each other.

Others made travel documentaries. For example, Claude Friese-Greene (1898-1943) was a British cinema technician, filmmaker, and cinematographer, who made more than 60 films between 1923 and 1943. In ‘The Open Road’, a film of his road trip from Land’s End to John o’Groats, we can see Torre Abbey Sands in 1924, re-edited and digitally restored by the BFI National Archive. This was Britain seen in colour for the first time.

In the social satire ‘The Last Holiday’ (1950), Alec Guinness plays a salesman who is told he has only a few months to live. His doctor advises him to take his savings and enjoy himself in the little time left. George travels to Pinebourne, an exclusive resort with an elite clientele with whom he has nothing in common. Pinebourne is, of course, Torquay and the up-market residential hotel he stays in is the Rosetor, now replaced by the Riviera International Conference Centre. 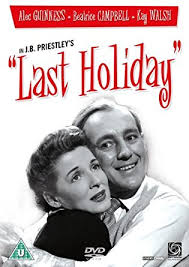 Incidentally, the movie also features Ernest Thesiger, best known for his performance as Dr. Septimus Pretorius in the 1935 masterpiece ‘The Bride of Frankenstein’ – and possibly the first openly gay character in the history of movie-making. If the plot seems familiar, in 2006 there was an American remake with Queen Latifah and LL Cool J.

We also featured in ‘Brandy for the Parson’ (1952) where a young couple experience a series of mishaps and accidents, and get unintentionally involved in a racket smuggling brandy from France. The ‘French port scenes’ were filmed in Torquay. 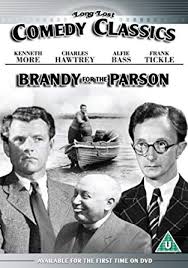 ‘The System’ (1964) – also known as ‘The Girl Getters’ in the United States, where it was heavily cut – is the story of a group of blazer-and-tie sporting young men scouring Torquay’s seasonal tourists in search of sexual conquests. Near the end of one summer, the leader of the group, played by Oliver Reed, aims to conquer an affluent fashion model, but finds himself unexpectedly falling in love. Music is provided by the Searchers, who make a rare film appearance in a club scene.

Directed by Michael Winner (Death Wish) with Nicholas Roeg (Performance, The Man who fell to Earth) behind the camera, ‘The System’ is described as “a great lost document of mod 60s British culture, utilizing the talents of many artists who went on to more celebrated accomplishments… a captivating, authentic precursor to Quadrophenia”. The advertising proclaims: “A generation who try not to fall not in love because it’s ‘square’… who fall in love because they’re young…”. It’s also the movie that gave us the term ‘Grockle’ for tourist.

Another similarly-themed Torquay-set movie was ‘That Summer’. Released in 1979, it starred a youthful Ray Winstone. Beraing in mind Ray’s similar role, there’s an ongoing debate over whether it was the follow on from ‘Scum’, with his character just having left a Borstal. The plot consists of two girls who arrive in Torquay to work as chamber maids for the summer. They meet two boys, also in Torquay for the summer, one of whom (Ray) is entered in the ‘Round the Bay’ swimming race. They come into conflict with a Scottish gang, one member also predictably being in the race. In a Torquay where every time you go out you meet the same people, various confrontations follow and Ray is framed for a robbery in a chemists’ shop. Our hero is arrested just as he is about to start the race, though he manages to escape, joins the race, forces the real villain to confess, and, of course, wins.

One scene that caused much amusement among locals was filmed in the Pickwick pub. In the film Ray gets a job and accommodation in the Pickwick – now Twiggy’s Bar. He opens his curtains and gets a fine view of Torquay harbour… rather than the back of Primark. As with ‘The System’, the 400 Club appears, and there are scenes on Oddicombe Beach showing how many people came to Torbay in the past. Also worth mentioning is the fine late 70s soundtrack. Here’s Ray being menaced by some stereotypical Scottish yobbos:

For years filming took place around the Bay for a series of TV movies based on the stories of bestselling author Rosamunde Pilcher. Starting in 1993, more than 60 Pilcher films have been made across Devon and Cornwall by the German television station ZDF and sold to 28 countries. Whether they accurately convey the reality of the Bay is questionable as, in one movie, we see impeccably-dressed, Italian-speaking Brixham folk haggling over high-quality antiques over the finest wines available to humanity! Pictured below is an elite dining scene from the now derelict Pavilion. 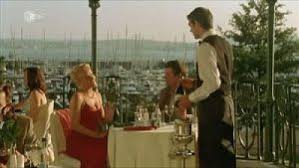 ‘Blackball’ (2003) starred Paul Kaye, Vince Vaughn, James Cromwell, Bernard Cribbins and Johnny Vegas. Cliff Starkey (played by Paul Kaye) is a rebellious young bowls player whose dream is to play for his country. However his behaviour gets him banned from the bowls club for 15 years. Picked up by a sports agent (Vince Vaughn), Starkey is re-branded as the “bad boy of bowls”, turning the normally sedate sport into a glitzy competition.

Although the plot is fictional, the central character was based on real-life local bowls player Griff Sanders. Blackball was filmed in Torquay (the Bowls Club and the Pavillion) and the Isle of Man during October and November 2002. To appeal to an American audience, the movie was known as ‘National Lampoon’s Blackball’ in the States’ which may have been a bit of a surprise for an Arkansas movie-going audience expecting to see Chevy Chase!

San-Antonio’ (2004) is a French movie based on a novel about the detective of the same name. San-Antonio and his partner have to escort the French ambassador to a British hotel. However, the ambassador is abducted by an attractive Italian woman and the detective is dismissed. Then the president of the Republic mysteriously disappears and San-Antonio is the only one who can save the day. He has 48 hours and a secret squad to find the president. Torquay features in some of the film’s locations, including Torquay Harbour and Meadfoot Beach. It was never released in the UK and, looking at the promotional clips which features a lot of french folks shouting, we don’t seem to have missed much.

Churchill: The Hollywood Years’ (2004) stars Christian Slater, Neve Campbell, and a host of British comedy talent, including Bob Mortimer, Vic Reeves, the late Rik Mayall, Harry Enfield and Leslie Phillips. The movie is a satire on the way Hollywood has written Britain out of the Second World War, in films such as U571 (which had the capture of an Enigma machine being by the Americans rather than the British) and Pearl Harbour (where Americans appear to have won the Battle of Britain). The film’s other targets are the upper-class pro-Germans who sought a compromise with Hitler. It has Winston Churchill (Christian Slater) as a US Marine seemingly channeling Bruce Willis. After singlehandedly repelling a Nazi invasion in 1940, he dies in the Battle of Britain, leaving Princess Elizabeth (Neve Campbell) pregnant. He is then replaced by a British actor resembling our wartime leader.

While mainly filmed at Plymouth’s Royal William Yard, the movie’s opening shot features Brixham Harbour as Plymouth Docks. We also see Oldway Mansion doubling as Buckingham Palace, along with Powderham Castle, and Cockington as Frothington-on-the-Waddle. ‘Churchill the Hollywood Years’ was directed by South Devon’s own Peter Richardson, who rose to prominence through the ‘Comic Strip Presents’ movies.

Finally, there is the Torquay-set ‘Snappers’, starring Joss Stone and filmed across the Bay, including Warren Road. As far as I’m aware (?), it hasn’t been released though it’s been around for a few years. There is a trailer, however, which features the deliberately attention-seeking lesbian kissing scene which caused such tabloid excitement back in 2007.

Sadly, few of these movies made much of an impact. If they had, perhaps things could have been different. Maybe Torquay could have become the British Cannes…