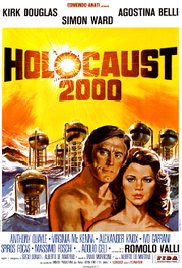 “The wildest farrago yet to have come out of the demonology genre”, Monthly Film Bulletin

Here at WASD we have a real fondness for movies filmed in South Devon – particularly if they’re pretty much forgotten, from the horror stable, and also bloody awful.

And so we have ‘Holocaust 2000’, a 1977 British-Italian horror movie directed by Alberto De Martino. Incidentally, just as Satan has many names, so does ‘Holocaust 2000’ – the film also turns up as ‘The Chosen’ and ‘Rain of Fire’. 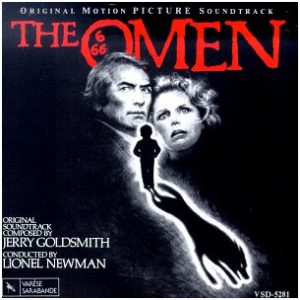 ‘Holocaust 2000’ is a good example of that exploitation sub-genre, the Cash-In, a rip-off of a high-grossing Hollywood film made to capitalize on the original’s success. In this case it’s the 1976 classic ‘The Omen’, an American-British supernatural horror film directed by Richard Donner and starring Gregory Peck. It was the first instalment in ‘The Omen’ series and concerned a baby adopted at birth by the American Ambassador. After a series of mysterious and inventive deaths the Ambassador comes to realise that the child is the Antichrist. ‘The Omen’ received acclaim from critics and was one of the highest grossing films of 1976, grossing over $60 million at the box office. It attracted two Academy Award nominations and won Best Original Score for Gerry Goldsmith. 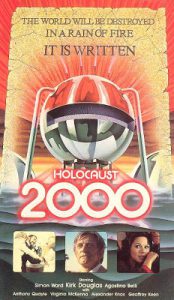 Not so this partly-South Devon-set Italian ‘homage’ – or blatant copy. Made by an Italian crew mostly in Italy and the UK, ‘Holocaust 2000’ is clearly director and writer Alberto De Martino’s rip-off of ‘The Omen’. He already had a track record of spotting an opportunity – during the 60s and 70s, Martino got United States distribution for his cash-Ins which included ‘Crime Boss’ – after ‘The Godfather’ – and the demon-possession picture ‘The Tempter’, made a year after ‘The Exorcist’. He also made 1967’s ‘Operation Kid Brother’, starring Sean Connery’s brother Neil as the civilian younger brother of a famous spy – see the theme? 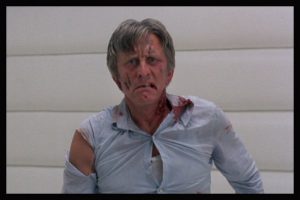 ‘Holocaust 2000’ stars movie legend Kirk Douglas, who plays American energy executive Robert Caine. “We must solve this energy crisis,” he insists in the first line of the movie, and becomes obsessed with building a “thermonuclear energy plant” that uses a “giant laser” to harness the “fusion power of the sun”. Ignoring numerous warnings from scientists and politicians that by doing so he could start “a chain reaction of nuclear explosions”, he makes the decision to build his nuclear power plant near a sacred cave. Robert further dismisses other warnings that the world will be brought to an end by a Biblical monster with seven heads and ten horns – see below for a terrifying, or perhaps comical, representation of the Beast that will destroy us all emerging from a bubble bath. He also doesn’t pick up on the fact that his spanking new power plant resembles the description of the Beast. 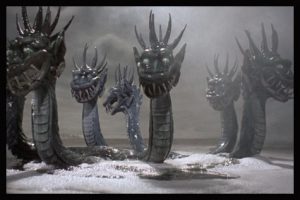 I can’t find the trailer for this oddity in English, but – as the movie was partly filmed in the Middle East – there is an Arabic version:

In the movie Caine’s wife has doubts about the plan but is quickly is stabbed to death by an Arab mental patient. Robert is thus freed to pursue his objective with his son Angel. But before he can reap the benefits of his bid for global domination, he discovers that Angel (Simon Ward) is the Antichrist, who is planning to use his father’s project to bring about the end of the world. 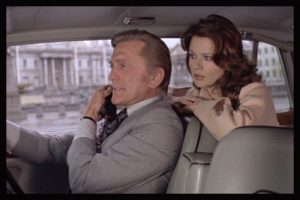 ‘Holocaust 2000’ was Kirk’s first in a series of late-1970s quirky choices for the man who played Spartacus. These include Brian DePalma’s ‘The Fury’, the Arnold Schwarzenegger Western ‘Cactus Jack,’ and the space-horror ‘Saturn 3’. 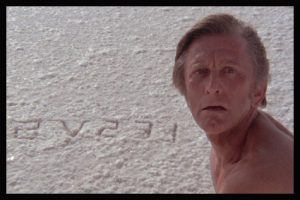 ‘Holocaust 2000’ takes itself very seriously, an approach which can border on unintentional comedy. Described by a recent critic as an “entertaining nut fest” we have a surreal dream sequence featuring the hilarious seven-headed beast, nightmares, religious fanatics and insanity. On the other hand, we do have a fine choral score from Ennio Morricone – the composer for many Italian Western movie soundtracks. And, for horror aficionados, the death scenes are often innovative and gory. In one scene a helicopter blade decapitates the prime minister of the film’s unnamed Middle Eastern country (pictured below). 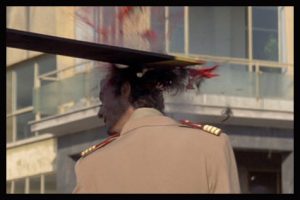 The zombie movie ‘Dawn of the Dead’ famously used the same idea a year later.

Here’s the Devon link. In one scene Caine/Kirk is getting a bit of a theology lesson on the sands next to Burgh Island – the Pilchard Inn is in the background. In stark contrast to the other gory and sudden deaths, Satan decides to eliminate his critic by very slowly making the tide come in. This watery – and easily avoidable – death can be seen 47 minutes in to the movie. Sadly, I can’t provide a direct Youtube link as you have to prove that you’re old enough to view it… but it’s not difficult to track down.