A Torbay based homeless charity have spoken out against a campaign that aims to ‘name and shame’ people that are thought to be professionally begging in Torquay.

The campaign led by local business man Ashley Sims and Ellie Waugh of Humanity Torbay aims to expose “professional beggars”. It has caused quite a discussion on social media, using the hashtag #fakehomeless.

Posters have been put up in Torquay warning people begging that they are not genuinely homeless they’ll be named and shamed – Which Ashley claims has worked, posting a video on social media showing no beggars at the bottom of the town, which used to be frequented by the homeless and people begging. 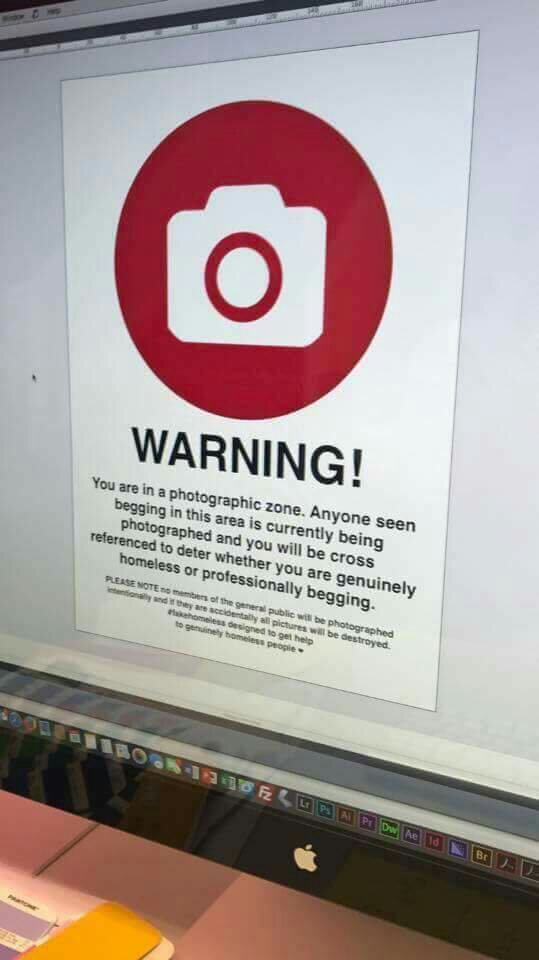 The poster design was shared on Facebook page Spotted Torquay

Local charity PATH (People Assisting Torbay’s Homeless) based in Torquay, have spoken out again the campaign saying it is “littered with pitfalls.”

PATH Torbay said on their Facebook page: “Following a committee vote last night,we can catagorically state PATH are strongly opposed to the recent naming and shaming scheme being highlighted on local tv and social media this week. Path will never support anything that uses unverified information to put very complex and vunerable people in danger.

“We were recently approached and consequently met with a person who heads this campaign. It quickly became apparent that their scheme is littered with pitfalls. Many of these were pointed out but sadly none of these have been heeded as yet.

“We were asked if path would identify photos of people begging and deemed to be fake homeless on Torquay streets.it was explained that any decision would have to be made by our committee and trustees. A unanimous vote took place against any such scheme.

“1.Peoples housing situations change all the time. Out of date information and someone being wrongly branded as housed, is entirely probable. Someone could get hurt and persecuted through no fault of their own. We believe that one photo has already been leaked who is actually street homeless as we speak. The Facebook hatred that this has incited is alarming.
We also pointed out that fake homeless posters could potentially be already out of date as they are being printed. The campaigners should be responsible for old posters that remain displayed publically and the injustice this may cause.
2.The complexity of reasons why someone is compelled to beg is not straightforward.leave it to the professionals who are trained to help complex needs and crime.
3.Once these campaigners open Pandora’s box,bare they prepared to then accept responsibility and manage the hate that would be incited as a result?
4.PATH support the police statement that although begging needs to be addressed,there is not in fact an increase in professional beggars. Neither will we be part of the frenzy of half truths, myths and legends that this media coverage has incited.
5.The potential backlash of such a scheme could potentially affect the community good will. Genuine charities,incentives and the homeless or vunerable would in fact get less valuable support from the general public, if misreported numbers and information designed to shock, were to be believed.
6.The vast majority of Groups and service providers who genuinely and responsibly care about ending homelessness and relieve poverty tend to join TESH. They see the benefits clearly and are happy to work as a collective. This is a far more efficient and most reliable way to tackle the complex reasons for street begging too.
7.Well thought through,tried and tested incentives are already about to be launched which are safer, well managed and promote longitivity of solutions to the complex needs of the vunerable people.

“Not one of these campaigners attended the TESH public meeting last night where they would have not only had opportunity to ask questions but would have heard first hand some of the positive work going on behind the scenes.

“Path are a very proactive member of TESH and support the new housing first option. We signpost into other TESH services so that someone in need gets the very best and suitable support for their complex, individual situations and problems.

“We are not bleeding hearts but are passionate yet respectful that everyone should have basic human needs, most of us take for granted. Being bullied, persecuted, targeted are not acceptable in any society nor do they do anything but incite hatred and hysteria,”