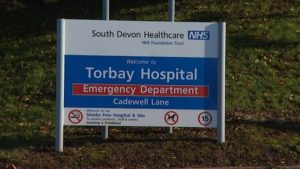 Two out of three operating theatres currently out of action at Torbay Hospital are to remain closed “until at least May”, with the possibility that only one of those will be able to re-open then, managers say.

Three theatres were initially closed last week because of problems with ventilation. The hospital has 10 theatres.

It will mean about 250 patients will have their operations cancelled, postponed or rearranged between now and Christmas.

Interim Chief Operating Officer John Harrison said staff anticipated being able to re-open one of the theatres “by the end of this week” after replacing a broken part.But he added that, of the two others, “it is possible we will only be able to re-open one rather than both”.

He said: “We are investigating options to build a new theatre on site, as well as bringing forward plans to replace our ageing theatres.”

The hospital said it was sincerely sorry for any distress, inconvenience or pain caused to patients.