As we move towards the 75th anniversary of the NHS in July next year, a new graphic timeline has been unveiled on the wall of a corridor at Torbay Hospital, which reflects on the history of health and social care in Torbay and South Devon and looks towards what the future might hold.

The timeline, which was unveiled in a ribbon cutting ceremony last week, is 30ft long, and features key dates both from the history of healthcare in the local area and more widely across the country.

Local people, visitors, patients and staff of Torbay and South Devon NHS Foundation Trust were asked what key dates they would like to see featured and, although not exhaustive, the timeline captures many important milestones.

These range from the opening of the first hospital in Dawlish in 1891, to the building of Dartmouth Health and Wellbeing Centre this year; from the CARRIE” project in 1997 which led to the development of the intermediate care service to our first day case hip replacement in 2018; and from the formation of the Pharmacy Department in 1970 (which grew into Torbay Pharmaceuticals) to the introduction of self-referral into musculoskeletal physiotherapy in 2006. 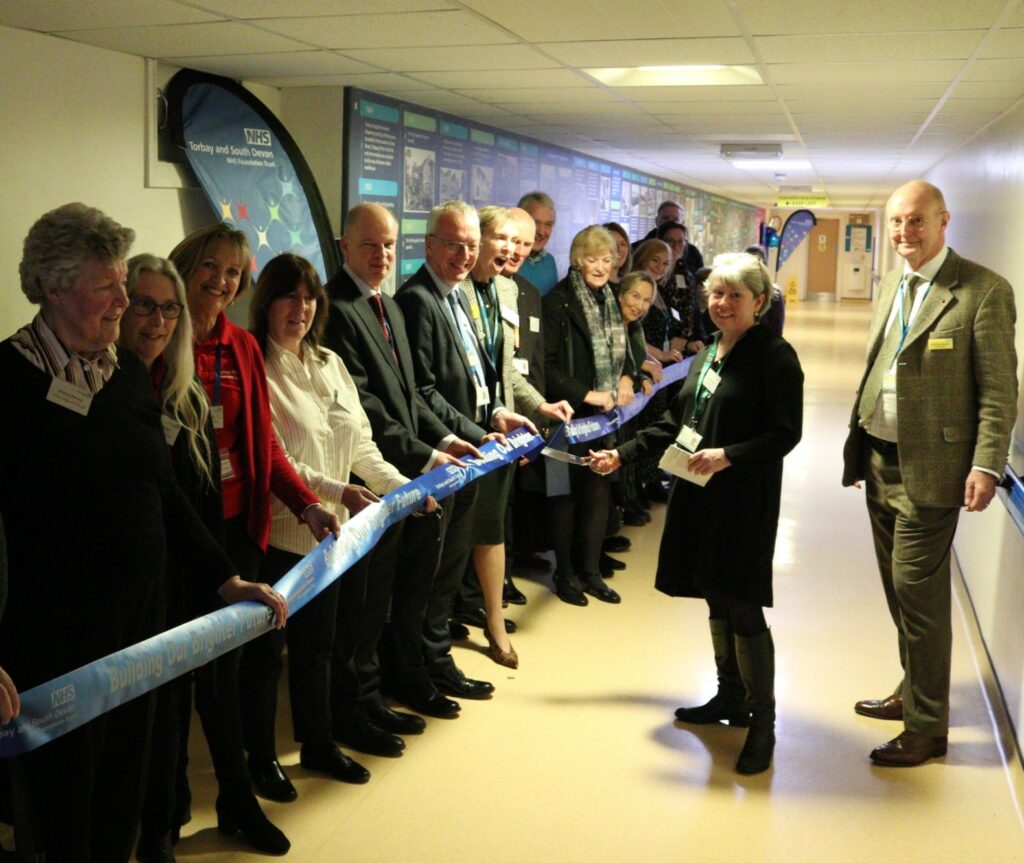 The timeline is rounded off with a television screen highlighting some of the organisation’s upcoming developments, including planning activity for the New Hospitals Programme, which is known locally as ‘Building a brighter future’ for Torbay and South Devon.

The ribbon cutting ceremony was hosted by Sir Richard Ibbotson, Chairman, and Liz Davenport, Chief Executive, and they were joined by representatives from Governors, Torbay Nurses League and their acute and community hospitals Leagues of Friends.

Legacy, a poem written by local poet Harula Ladd, was recited at the ceremony by Dr Joanne Watson, Health and Care Strategy Director. The poem was written as part of the day of remembrance in March which marked the anniversary of the first COVID-19 lockdown, where Harula wrote poems for staff, patients and visitors on themes which matter to them and which reflect on the extraordinary work of people in the NHS during an incredibly challenging time.

Liz Davenport, Chief Executive, said: “Our new graphic timeline is a fantastic way of reflecting on where the organisation has come from, who we are today and where we want to be in the future. It has certainly brightened the corridor and I know that visitors and staff alike have already been stopping to read, remember and enjoy.

“Thank you to the Building a brighter future team for putting it together, our designer and signage provider for making it possible as well as everyone in our local community who contributed and suggested key dates that they would like to see featured.”

Sir Richard Ibbotson, Chairman, said: “We have a proud history here in Torbay and South Devon and it is fantastic to see this reflected in our timeline.

“This has been an excellent opportunity to honour our past and celebrate our achievements and milestones, and we equally understand the importance of learning from our mistakes and identifying when things need to change. By doing this, we can look towards our brighter future, building on what has gone before.

“It was fantastic that we were able to celebrate the opening with representatives from our hospitals’ leagues of friends, Torbay Nurses League and our Governors. The support that they and our other key partners and supporters provide is a key part of who we are as an organisation today.”

Visitors to Torbay Hospital can find the timeline on the long corridor from the level 4 main entrance foyer, heading towards the Bayview Restaurant.