During the nineteenth century a few families transformed a collection of rural hamlets into the richest town in England. By the early twentieth century, however, the political and economic authority of the landed aristocracy and the gentry had declined and there was a transfer of power and ownership in favour of the local middle classes.

In Torquay, the Haldon family had begun to disengage in 1885 and had completed their withdrawal from the town by 1914. More immediately noticeable was the 1930 sale of Torre Abbey by Commander Henry Cary to Torquay Borough Council. The house had been in the possession of the Cary family since 1662. 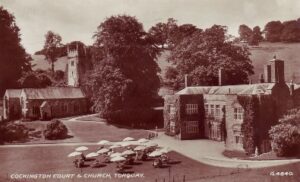 On occasion those landowners were also politicians. In the late nineteenth century the MP for Torquay was Richard Mallock. From 1654 the Mallocks family estate was Cockington Court and, following the national trend, the family sold their lands to the Torquay Corporation in 1932.

In the place of these prominent leaders of society, and their often fractious relations with each other, came a wider constituency of prominent but also anonymous municipal politicians; and the rise of a distinctive form of Torquay politics.

Torquay, at a parliamentary level, corresponded to other seaside resorts in that it generally elected Conservative Party candidates. 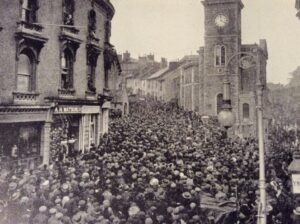 The Torquay Constituency was created in 1885:

For decades Torquay was traditionally one of those constituencies that gave Conservative MPs significant majorities. For example, at the 1959 General Election, the Conservatives’ Frederic Bennett received 29,527 votes against Labour’s William Cooper on 11,784. Indeed, Conservative dominance became an accepted fact in 18 seaside resorts; in the same way that coalmining areas were seen as Labour strongholds.

Hence, the longstanding epithet of ‘Torybay’.

A variety of suggestions have been made for this Conservative dominance, including: a generally affluent and large middle class; an above-average elderly population; the power of hoteliers; deference-generating service occupations; and small businesses relying on networking and personal contacts in a small town. 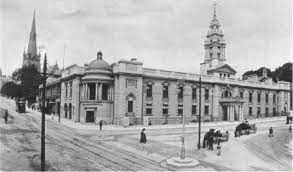 Importantly, casual and seasonal work made trades unions difficult to organise. An alternative labour tradition then failed to become established as it had in towns with a more traditional industrial base. Consequently, this restricted the development of the Labour Party. And it is noticeable that the 1997 New Labour landslide didn’t reach many similar resorts. Instead, the Liberal Democrats were elected in Torbay, Weston-super-Mare and Southport.

In other urban areas, class was a major factor in local politics, usually employers’ interests challenged by a growing labour movement. Torquay, in contrast, saw issues contested within the middle class, with the town’s unrepresented seasonal and irregular workers being generally excluded from ongoing debates about the town’s future.

While the local council remained largely non-party political, it did coalesce into a variety of factions and interests. On one side, the holiday industry and businesses; on the other, residential and retired groups.

Between the wars Torquay had four groups which vied for control of the Council. Notably, only one of these saw itself as being a part of national politics. They were: ‘the Hotel Party’, centred on the Hoteliers Association; a faction which demanded low rates; the advocates of a distinctive and elite tourist season; and the Labour Group.

The Hotel Party campaigned for municipal investment in the holiday industry through the provision and upkeep of amenities to attract visitors. In contrast, other campaigners were dedicated to keeping local taxation to a minimum and opposition to anything seen to be negatively affecting the town’s image. In 1930 the Ratepayers Association and the 800-strong Citizens League would emerge to campaign for their interests with the active support of the Torquay Times.

Throughout the inter-war period there would be numerous conflicts between the factions. Often the Hotel Party and its allies would be in the ascendancy as significant expenditure was evidently made promoting the town and on tourist-friendly parks and gardens.

On the other hand, alliances were formed and votes passed against inappropriate innovation, such as Sunday rail excursions in 1927; while the very idea of fish and chip stalls around the harbour was rejected.

One intriguing suggestion is that it was the influence of the older generation of residents that restricted the kind of seaside entertainments that were being offered for families in other resorts. In one example from just after the Second World War, Torquay rejected a plan to construct a children’s miniature railway near the Pavilion – Paignton was apparently seen as more suitable for those with children. 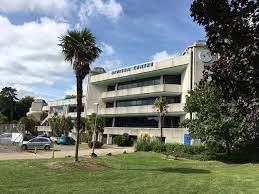 It could be argued that this quiet conflict perseveres as it has deep roots in the history and culture of Torquay. Modern illustration of this could be the debates around the Riviera Conference Centre and the Pavilion development. And keep an eye on the future of the Living Coasts site.

It was only after the Second World War that party politics truly entered the council chamber. In 1945 Torquay council had 35 independents and a single Labour councillor. In response the Conservatives began to put up official candidates in 1947. The Liberals followed and began to win Council seats from 1958 onwards.

During the 1970s the Conservatives in many resorts began to lose their seaside strongholds. This may be traced back to the decline of resort economies, the erosion of a self-confident middle class and a gradual increase in coastal poverty.

Another factor was that Torquay had always attracted older residents but these incomers were generally affluent. This changed with the seaside retirement boom of the 1960s. Retired incomers were then often on fixed and even declining incomes, were living longer and needing more support from local services.

Property taxation was accordingly a very emotive issue and resorts with little industry found that a high proportion of local expenditure fell on residential property. 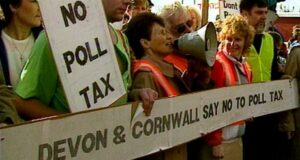 In 1990 a new form of local taxation, the Community Charge, was introduced. Torbay had the highest charge in the West Country and local incomes amongst the lowest, but few expected the degree of resistance that was to come. On March 17, 1990, an ‘Axe the Tax Rally’ was held on Paignton Green- 5,000 people attended. At the 1997 General election the Conservatives lost Torbay for the first time since the 1920s. 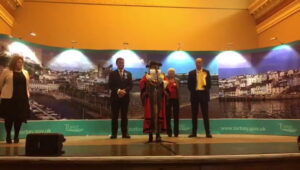 The Conservatives would, of course, make a comeback in 2015… And so the story continues…