Tis the season to be woolly… People love Christmas jumpers, so why not rhinos? Volunteers at Paignton Zoo in Devon have knitted an over-sized pullover for a life-sized rhino sculpture.

A team of 13 volunteers started knitting and crocheting in July, in between their usual volunteer duties. Every knitter created at least 6 squares in either red or green, each square 8 inches across. The finished garment is a patchwork of 75 squares decorated with crocheted holly leaves and berries, snowflakes and reindeer heads. 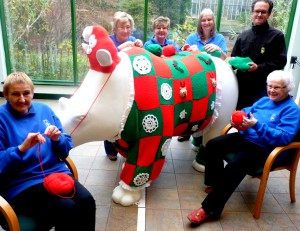 Paignton Zoo Volunteer Co-ordinator Neil Thomas-Childs said: “It’s been a great group activity for volunteers of all ages and abilities. Some can do a square in 2 hours, while for others it takes a little longer. Some need to follow a pattern whilst others make up the design as they crochet!”

The volunteers clocked up over 300 hours and used nearly 4 kilos of wool. The jumper has a 250 centimetre chest and is 1 metre from neck to waistband. Neil: “We think that equates to XXXXXXL!”

Named “Ho! Ho! Ho! Woolly Rhino!” the festively festooned rhino – who is taking pride of place in the Zoo’s entrance hall over the Christmas period – also has a knitted hat, leg-warmers for his back legs and a crocheted beard. 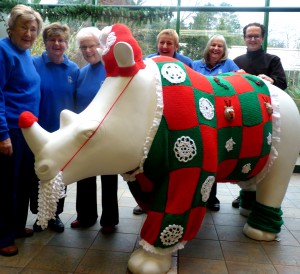 Woolly Rhino is part of the charity’s Christmas celebrations, which include party nights and Santa’s grotto. He’s also promoting The Great Big Rhino Project, which will create a free public art trail around the streets, parks and open spaces of Exeter and the English Riviera next summer, encouraging thousands of people to get out and enjoy the spectacle.

The Great Big Rhinos arrive in South Devon on Saturday 30th July 2016. Money raised will go to Save the Rhino International and to Paignton Zoo’s own rhino work in Zimbabwe. Rhinos have been on the planet for 40 million years. There are five species: black, white, greater one-horned, Javan and Sumatran. All of these are threatened with extinction – three are Critically Endangered as defined by the IUCN (World Conservation Union). This means that they will not survive without massive and urgent action.

Previously, volunteers have knitted animals for the twelve days of Christmas and yarn bombed trees around the Zoo. Volunteers support Paignton Zoo, a registered charity, throughout the year in a varied range of volunteer roles. For information on volunteering, go tohttp://www.paigntonzoo.org.uk/support-us/volunteer

James Joyce and a Torquay Bloomsday