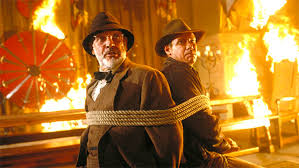 In the original script of ‘Indiana Jones and the Last Crusade’ (1989), George Lucas wrote the role of Indiana Jones’ father as a professor of medieval literature who cared more about looking for the Holy Grail than raising his son.

The role was written as ‘a crazy, eccentric’ professor whose relationship with Indiana is ‘strict schoolmaster and student rather than a father and son’. Sean Connery initially turned the role down as he was only 12 years older than Harrison Ford. However, he changed his mind, and – being interested in history – began to reshape the character. Revisions were then made to the script to address his concerns. 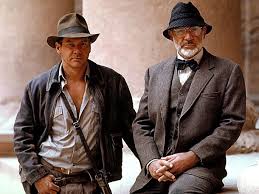 Connery based his character on a Torquay-born adventurer: “I wanted to play Henry Jones as a kind of Sir Richard Burton.” 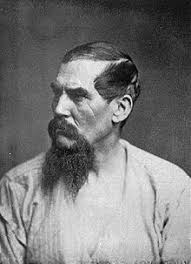 Richard Burton (1821-1890) was an explorer, linguist, author, and soldier. In 1853, taking leave from the army, he undertook a ‘Hajj’ or pilgrimage to Mecca, in disguise. His account of the trip made him famous. Burton then made a journey to the forbidden East African city of Harar, disguised as an Arab pilgrim. Europeans were not allowed in Arabian holy cities, and were executed if they were caught.

In 1855, Richard (pictured above) and three companions began an unsuccessful trip in search of the source of the White Nile. After serving as a soldier in the Crimean War, Burton returned to Africa in order to renew his search. After much hardship, he made it to Lake Tanganyika, and his party were the first Europeans to see it.

Burton was a prolific author, writing 43 volumes about his trips. He also translated the ‘Kama Sutra’, ‘The Perfumed Garden’ and the 16 volumes of ‘The Tales of the Arabian Nights’. 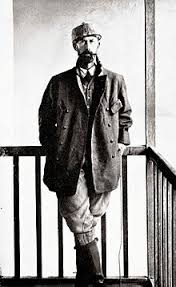 It’s also been suggested that Indiana himself was based on another Torquay-born explorer, Colonel Percival Harrison Fawcett (1867- unknown). Percival (pictured above)  joined the Royal Geographical Society in 1901 and worked for the British Secret Service in North Africa.

Percy’s first expedition to South America was in 1906 when, at the age of 39, he travelled to Brazil to map a jungle area. On that particular trek, he claimed to have seen and shot a 62 feet long anaconda. Fawcett made seven expeditions between 1906 and 1924. Though he took a break during the Great War while he volunteered to lead an artillery brigade in Flanders despite being almost fifty years of age.

In 1925, with funding from a London-based group of financiers called ‘The Glove’, Fawcett returned to Brazil with his elder son Jack. The aim of this expedition was to search for the ‘Lost City of Z’. Fawcett had become convinced, through reading ancient legends and historical records, that the fabled city must lie somewhere in the Matto Grosso region.

Nothing more was heard of the expedition after it disappeared into the jungle.

During the following decades, various groups mounted rescue missions without result. It’s estimated that one hundred would-be-rescuers died in more than 13 expeditions sent to uncover Fawcett’s fate. Arthur Conan Doyle used Fawcett as the inspiration for Professor Challenger in his novel ‘The Lost World’.

Edward’s ‘The Secret of the Desert’, was possibly the first fictional account of an armoured fighting vehicle, two decades before the first tank appeared. In 1893 he published ‘Hartmann the Anarchist’ which related the story of a terrorist who bombs London in a series of air raids. The idea that air power could devastate cities was a decade before the Wright brothers first flew and the storyline predated HG Well’s ‘The Shape of Things’ to come by 40 years.

Now that we’ve mentioned HG Wells, it’s worth noting that Wells’ most famous book, ‘The War of the Worlds’, has a Torquay association. ‘The Sea Raiders’ is an 1896 short story which also covers assaults on humans by creatures from an alien environment – this time off the South Devon coast. At the culmination of the narrative, the remains of a sea monster are discovered on a Torquay beach. The description of the remains are very reminiscent of the aliens that gave Tom Cruise such a hard time in the 2005 movie. 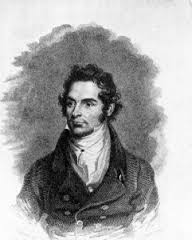 Finally, we have the Arctic explorer William Scoresby (1789 – 1857). William made yearly voyages to Greenland between 1803-22, at first on his father’s whaler, and then as the captain on other ships. He mapped, charted, made deep-sea temperature soundings, described the flora and fauna, and collected other data along the coasts of Greenland. He also made a voyage to Australia in 1856 to study terrestrial magnetism. William’s several books on his arctic experiences helped lay the foundations of modern arctic geography. Many of his papers, log books and instruments are now held at the museum in his home town of Whitby.

William built a villa in Torquay, and was appointed honorary lecturer at St. Mary Magdalene Church in Upton where he is commemorated by a memorial decorated with a mariner’s compass and dividers. Indicating William’s importance, we have place names around the world. From Cape Scoresby, south of the Antarctic Circle, to the Melbourrne suburb of Scoresby.

His fame goes even further. The next time there’s a full moon, you may just be able to catch a glimpse of the lunar crater ‘Scoresby’.