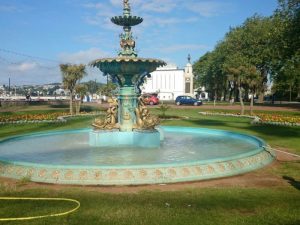 An escapee from London, I’ve lived in the Torbay for seven years now and I’m constantly bemused by headlines about building and renovation plans for the area, from Paignton’s Oldway Mansion, decaying like Dickens’ Satis House, to forever changing ideas about Torquay’s comparably crumbling Pavilion.

Well, Torbay residents now have a chance to hear more about the various plans for the area’s future by attending the next Mayor’s Forum on Thursday 26 at the Riviera Centre, covering a variety of subjects, including:

An update on the refurbishment of the toilets in Torbay – much needed!

Public Realm Concept Design for Torquay Harbour side and inner Harbour (Including the Pavilion?)

An update on the planned works for Pier Point

Details about the Old Tollhouse in Torquay

‘Other topics,’ they tell us, ‘will be confirmed at a later date.’

The Mayor’s Forum will take place in the Rosetor Room, starting at 6pm, and members of the public are invited to turn up on the night. The forum itself and parking for the event are free.